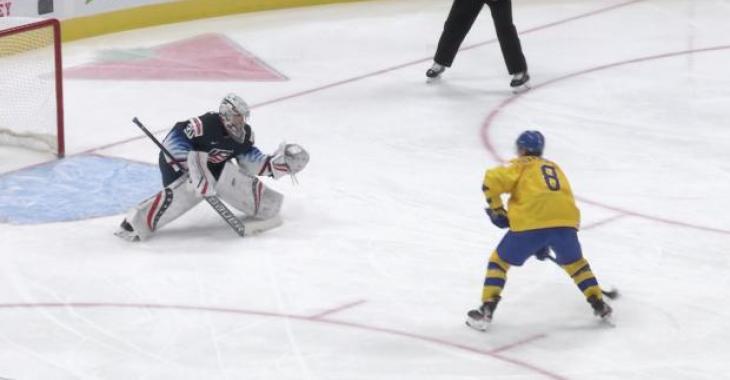 On ice, when you take a penalty shot for your team, the spotlight is on you and you only, and you can’t get away from it.  And we bet that Sweden’s Victor Soderstrom would have liked to after what happened on Thursday night when his team faced off against the United States in the last game of Group B.

USA was already in the lead 3-0 when Soderstrom stepped up to take a penalty shot in the second period. The young defenseman, who was selected in the first round, 11th overall by the Arizona Coyotes in 2019, appeared ready to score, however, it was false hope.

Check out the penalty shot nightmare from last night… Try not to cringe.

Tough break for the talented prospect. It is a rare chance to go one on one with a goalie, and nothing says he would have beaten Knight, but he didn’t get a chance at all.

His teammates cannot blame him though, none of them managed to score last night, losing 4-0 at the hands of the Americans.

Let’s hope he can forget about this one and focus on his quarterfinal match up against Finland on Saturday.

Rangers staff and players rebel against management's plan to tear it all down!
Subscibe to
Our NEWSLETTER
Receive the best articles of the web directly in your email