​We have all noticed the quilt bearing the Broncos logo and colours behind Team Canada’s bench in Edmonton. 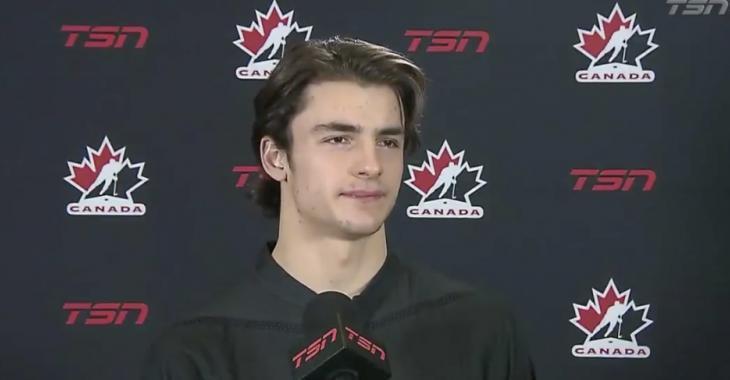 We have all noticed it. On the first game of the World Junior Championship journey for Team Canada on Boxing Day, a quilt bearing the Humboldt Broncos logo and colours draped over the empty seats of Edmonton’s Rogers Place behind Team Canada. It remains there, supporting the young players who believe it is so important to remember the victims and support their families.

On April 6, 2018, the Humboldt Broncos of the SJHL were travelling to a playoff game against the Nipawin Hawks when their bus collided with a semi-truck  at an intersection on Highway 35. Sixteen people died and 13 others were injured.

Team Canada’s Braden Schneider, who returns tonight after serving a one-game suspension for an illegal check to the head of forward Jan-Luca Schumacher of Germany, played with members of the 2017-18 Broncos. Schneider spent time on the Prince Albert AAA Mintos roster in the 2016-17 season with both Jacob Leicht, who was killed in the crash, and  Layne Matechuk, who suffered severe injuries. He gave a touching tribute to the Broncos when talking about the importance of the quilt behind his team’s bench ahead of tonight’s contest against Switzerland.

“It puts a smile on my face and gives me shivers a little bit just seeing that.”

This is just fantastic to see, how players and people across Canada are not forgetting about the tragedy and continue to support families, teammates and friends of the victims.

“Quilts symbolize comfort, strength, resilience and coming together,” Hockey Canada’s World Junior account said on Twitter. “Our hearts will forever be Humboldt Strong. Woven into the fabric of Canadian hockey.”