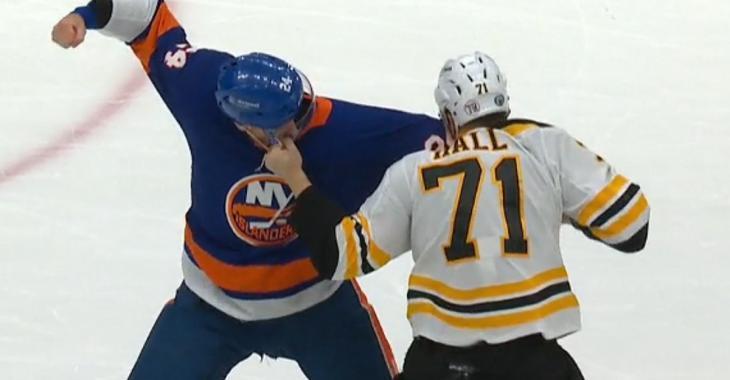 Things have been getting heated in this series and there is perhaps no better sign of that than this incident from the first period of Game 4.

On Saturday night the Boston Bruins and the New York Islanders faced off for the fourth time in their second round series in the Stanley Cup Playoffs and it was just minutes into the game when we got our first scrap of the night. What made this one so unique however was that it featured Bruins star forward Taylor Hall, a player that has made a career in the NHL by using his hands in a much different way.

Hall took on Islanders' defenseman Scott Mayfield in this one which makes this whole thing even more surprising given that Mayfield is no stranger to throwing his fists, at least not when compared to Hall who has very rarely fought during his career in the league. To the surprise of no one it was Mayfield who appeared to get the better of the exchange between the two men, with the Islanders defenseman appearing to land the harder blows and also appearing to land more of them, but full credit to Hall here for showing a willingness to defend himself against a tough opponent.

Hall had been slammed to the ice after delivering a hit to Mayfield and no doubt he was looking to show that he would not be bullied by the tough Islanders defenseman.

This however was just the first fight of the period between these two teams as the blood of both teams continued to boil. The second fight of the period was between two heavy hitters in the form of Bruins defenseman Jarred Tinordi and Islanders forward Matt Martin, and this one came after both teams brawled for a moment in the corner.

The brawl was sparked by a high stick from Islanders star forward Mathew Barzal, one that caught Boston's Curtis Lazar up high in the face when he was coming in to deliver a hit on Barzal. Lazar went down to the ice and a penalty was called on the play, but that didn't stop either team from getting into it with each other after the whistle had been blown.

Rumor: Oilers forward Zack Kassian may be on the trading block.
Subscibe to
Our NEWSLETTER
Receive the best articles of the web directly in your email