Videos : Scott Sabourin and Justin Holl drop the gloves in the final game of the preseason.

A preseason scrap between the Leafs and Sens. 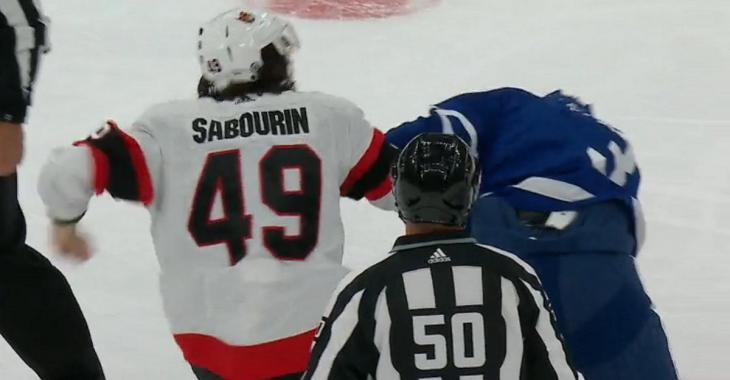 I get the feeling that the Battle of Ontario is going to be very intense over the course of the next couple of seasons.

On Saturday night the Toronto Maple Leafs and the Ottawa Senators squared off in a preseason game that unquestionably carries with it regular season implications. The game itself won't count in the standings, but the two squads will face each other again this week when the regular season officially gets underway and the intensity in tonight's game has thus far reflected that fact.

It was only roughly midway through the game's opening period when things turned ugly between the two Ontario based franchises, with Maple Leafs defenseman Justin Holl serving as the match that lit the flame. It was during that opening period that Holl delivered a bodycheck to a vulnerable Tim Stutzle, Ottawa's 3rd overall pick at the 2020 National Hockey League Entry Draft, and given Stutzle's status on this Senators roster that was simply not something the Sens were going to abide.

Holl caught Stutzle with his head way down and although he did not deliver the bodycheck in a particularly forceful manner, it was enough to get the attention of Senators enforcer Scott Sabourin. Sabourin, who has also played for the Maple Leafs in the past, immediately went after Holl following the hit and demanded a fight from the Leafs defenseman.

Holl did drop his gloves in response to the aggression from Sabourin, but I would be lying if I suggested that Holl put up any kind of fight against the stronger and more experienced Sabourin. The Senators enforcer had his way with Holl and I think it would be more accurate to describe this as a one sided mugging on the part of Sabourin rather than any kind of fair fight between two evenly matched competitors.

No doubt this will only serve to add even more fuel on to an already red hot rivalry coming into the start of the regular season, especially when considering the fact that neither team was fielding their full roster of players in tonight's exhibition game.

First here's a look at the hit that led to the fight:

Here's a look at the exchange between Holl and Sabourin: