He has been the subject of much trade speculation. 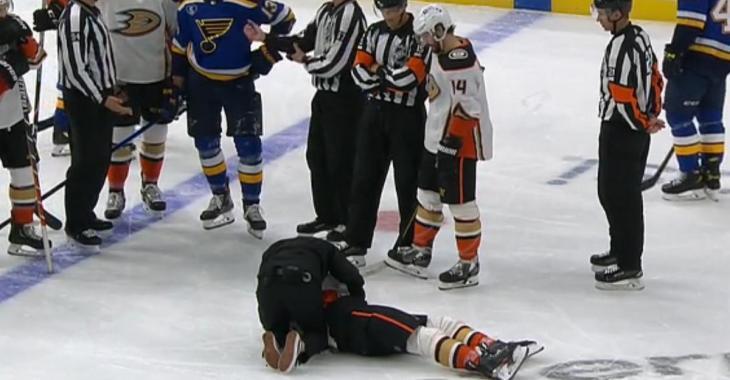 We have an injury to report and this one could be significant in more ways than one.

On Sunday afternoon the St. Louis Blues faced off against the Anaheim Ducks and during the second period of the game a fluke accident has led to a relatively serious looking injury. We were roughly 13 and a half minutes into the second period when Ducks forward Rickard Rakell was knocked to the ice after St. Louis Blues veteran forward Kyle Clifford took his legs out from under him.

Full credit to the Ducks here who made no real attempt to go after Clifford for injury Rakell, and I say that because this really does appear to have been a total accident. Clifford was turning around at center ice and appeared to lose an edge, sending him sprawling to the ice in a fall of his own. Unfortunately the momentum from his fall carried him into the back of Rakell's legs and completely knocked the Ducks forward off balance.

Rakell's crash to the ice was frankly sickening. It appears as though the full impact of both his momentum and his body weight came crashing down on the back of his head, slamming his skull into the ice. As you would expect following such a severe impact Rakell appeared to be out cold on the ice, where he would lay unmoving for several long moments while being attended to by the trainers.

The seriousness of this injury was underscored by the fact that players from both teams gathered around their fallen peer on the ice, and it genuinely seemed as though both the Blues and the Ducks were very concerned for his well being. Thankfully there was a silver lining here and that came in the form of Rakell showing some signs of life after several minutes on the ice, although he was not able to leave the ice under his own power. There was no stretcher or anything like that, but Rakell needed the help of several people just to even get off the ice and back into the Ducks locker room.

Obviously there are serious implications here because of the potential injury, but unfortunately for the Ducks Rakell was also rumored to be a potential trade target at the deadline. He was mentioned in connection to the Maple Leafs on several occasions but it would appear that the odds of that happening now are very slim, making this situation even worse for the Ducks organization.

No update on Rakell from the Ducks just yet, but we will bring that to you as soon as possible.