No doubt the end of his hockey career. 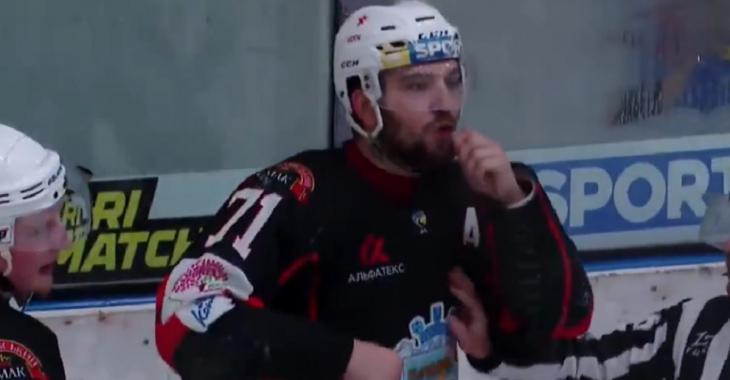 The Ukrainian Hockey League has just been the site of a very disappointing display of racism in the sport of hockey.

A video that has quickly begun circulating on social media has captured a blatantly racist taunt that was directed at American born defenseman Jalen Smereck. In the video an opposing player named Andrei Deniskin, who I must admit I am not familiar with, can be seen taunting Smereck who is a black man. The problem here is that the taunt is clearly racist in nature, with the player mimicking the act of peeling and eating a banana, and one that was unquestionably targeted at Smereck because of the color of his skin.

I've been around the hockey community long enough to know that this kind of behavior simply will not be tolerated, and I am pleased to report that Smereck's team has quickly responded to the incident. The team has released a statement strongly condemning the behavior directed at their player, and here it is translated from Russian:

Hockey Club Donbass strongly condemns all forms of discrimination and is outraged by the behavior of Andrei Deniskin. The Donetsk club rejects any racist manifestations - racism has no place either on sports grounds or outside of them.

I suspect that this could very well mark the end of Andrei Deniskin's time as a professional hockey player, at least as far as any professional league might be concerned. If he is indeed hit with a harsh punishment over these actions I suspect that there will be relatively little sympathy coming his way.

Here's a look at the video of the incident:

Perhaps the worst part of this is the fact that it comes at a time when Smereck should be having the time of his life right now. His team became the first Ukrainian hockey club to qualify for the Champions Hockey League just roughly one month ago, and he was named 'best defenseman' as well in spite of being the only American born player on the roster.

I can understand why Deniskin could have become frustrated in a sport as physical and grueling as the sport of hockey, but there are lines you should simply never cross. This is definitely one of those.