Videos : Petr Mrazek leaves the game after being pancaked in his own net.

Mrazek leaves the ice in agony. 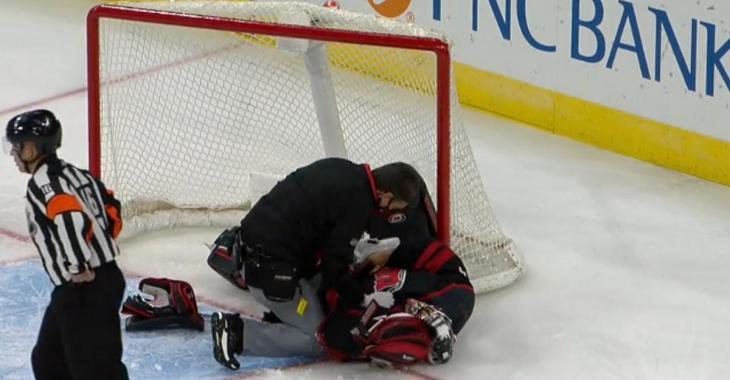 The Carolina Hurricanes are no doubt hoping for the best right now, but this one did not look good.

On Saturday night Hurricanes goaltender Petr Mrazek suffered what initially looks like a pretty serious injury to his hand on his blocker side. The injury occurred when Mrazek was pancaked into his own net during the first period of a matchup between the Hurricanes and the Dallas Stars, but it was not a Stars attacker that actually crashed the net.

Instead it was actually Hurricanes forward Max McCormick who ended up slamming into Mrazek, and on the slow motion replay you can clearly see that Mrazek's blocker becomes pinned between his own body as well as McCormick's leg or knee. Mrazek's blocker comes off of his hand almost immediately after the two men collide and it is immediately apparent that Mrazek is in considerable pain on the ice. Not only does he himself look like he's in pain, but as soon as the players around him see the state of his hand they immediately begin to signal the trainers behind the bench.

It's unclear exactly whether Mrazek's hand or wrist took the brunt of the injury, initially it would appear to be the hand given that the players seemed to react quickly to what they saw on the ice, however Mrazek could also be seen cradling his wrist as he made his exit from the ice so that could also be the source of the injury. It's worth noting that McCormick's skate also comes dangerously close to Mrazek on this play, so a potential cut is not out of the question here either.