Videos : O'Brien and Bortuzzo throw bombs after all hell breaks loose in the neutral zone!

Some heavy shots being thrown. 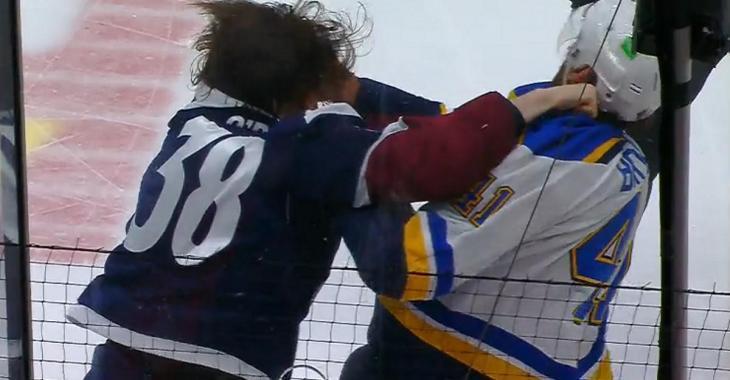 After seeing this exchange I must admit I would love to see these two do it again.

On Saturday night things got a little hectic during the second period of a matchup between the St. Louis Blues and the Colorado Avalanche, and that honestly might be an understatement. The game had been relatively uneventful up until that point, with each team picking up a single goal and the score tied at 1 - 1, but a series of events including contact from Blues forward Jaden Schwartz with Avalanche goaltender Philipp Grubauer led to tensions suddenly exploding between these two teams.

Although the contract had occurred in the Avalanche's zone, play was not blown dead immediately and this led to a melee in the neutral zone between several of the players, one that appears to have been instigated by a conflict between the Avalanche's Pierre Edouard Bellemare and the Blues' Robert Bortuzzo.

In the end several players from both teams became entangled in the brief brawl at center ice, however during the scrum the aforementioned Bortuzzo and Avalanche newcomer Liam O'Brien locked eyes with one another and that was all it took. Even though neither man had been fighting the other prior to them catching one another's eye, they both immediately dropped their gloves and started unloading some heavy bombs on one another.

Both men landed some heavy shots in this one but unfortunately it was over almost as fast as it started thanks in large part to Bortuzzo dragging O'Brien down to the ice. There was nothing during the broadcast to indicate that either man had been injured in the exchange, but nonetheless O'Brien was immediately escorted to the Colorado Avalanche locker room for some unknown reasons. Both players were awarded a fighting major and Schwartz was given a goaltender interference penalty but nothing more would come of it.

These two teams will face one another again in just 10 short days and I would love to see O'Brien back in the lineup for the Avalanche in the hopes that we can see a rematch between him and Bortuzzo. That being said O'Brien was appearing just in his second game for the Avalanche, so who knows if we will get to see it.