Videos : Milan Lucic sends Auston Matthews into the boards with a hit from behind.

Published on Saturday, March 20 2021 by HockeyFeed in Videos 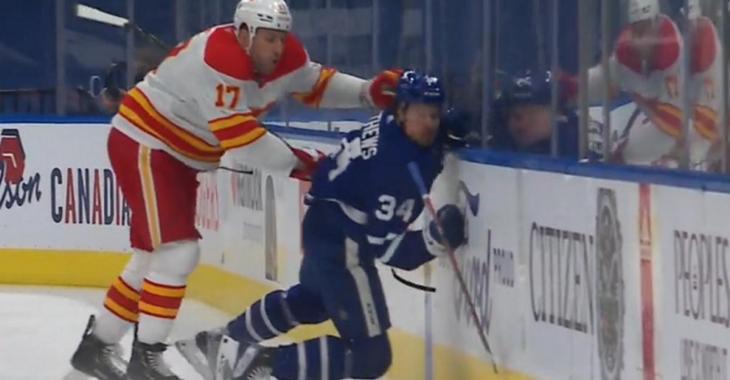 The Toronto Maple Leafs and the Calgary Flames are facing off on Monday night and things got ugly early on.

With less than half the time gone during the game's very first period Leafs star forward Auston Matthews found himself on the wrong end of a questionable hit from Calgary Flames veteran Milan Lucic. Lucic was looking to finish his check on the vulnerable Matthews but not only did he appear to be a little late, but he also delivered the hit right between the numbers on the back of Matthews' jersey.

Thankfully Matthews was fine in spite of being sent awkwardly into the boards as a result of the hit and Lucic and his Flames were awarded a two minute minor penalty for interference, which I feel was the right call here, off the back of the hit. I would expect that the Maple Leafs will look to answer this hit at some point during the game, although I don't know how many members of the Leafs roster are going to be interested in challenging Lucic off the back of that hit.

The Leafs were unable to convert off the back of the powerplay they got as a result of this hit.

There is still plenty of time left in this one with only one period in the books so far, so it remains to be seen if Lucic will be asked to answer for the hit.