Videos : Mathew Barzal goes head first into the net to score the first goal of the third round.

Barzal with the first and only goal of the game so far. 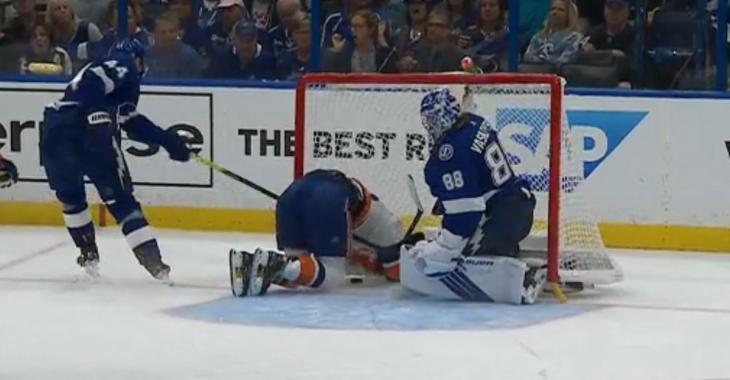 The Tampa Bay Lightning and the New York Islanders kicked off the third round of the Stanley Cup Playoffs on Sunday afternoon and perhaps somewhat surprisingly this has been a very low scoring affair thus far. Physical play has largely dominated this game on both sides of the ice but New York Islanders star forward Mathew Barzal finally broke the ice in the game's second period and did so in spectacular fashion.

It was a series of mistakes from Lightning star forward Steven Stamkos that led to the opportunity for Barzal, Stamkos tried a cross ice pass on two different occasions that eventually caused a turnover which led to a partial breakaway for Barzal and he made absolutely no mistake. The Islanders star fired off the puck, beating arguably the top goaltender in the league in Andrei Vasilevsky, and he then proceeded to go crashing head first into the net following the goal.

It's worth noting here that we have not seen Stamkos back out on the ice since the goal was scored by Barzal. I'm not sure he was was hurt on the play, which I doubt considering it did not appear that he was in any discomfort, but it may very well be that Lightning head coach Jon Cooper has kept him on the bench in response to such a major mistake on the part of the Lightning captain.

Update: Stamkos came back out in the final seconds of the second period as the Lightning got a power play late in the frame.

Leafs, Flames, Red Wings, and Sharks all waive players on Sunday.
Subscibe to
Our NEWSLETTER
Receive the best articles of the web directly in your email