Videos : Marchand scores the Bruins first of the season on a penalty shot! 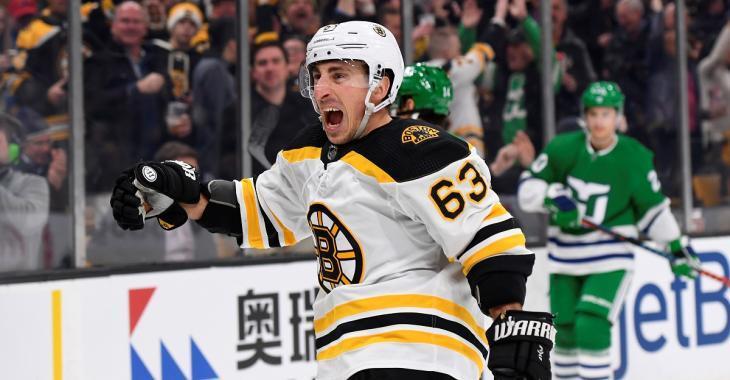 Who else was it going to be really?

On Saturday night the Boston Bruins kicked off their regular season when they faced off against the Dallas Stars and it was veteran forward Brad Marchand who got the Bruins off to a great start. Although Marchand has made a name for himself for antics that have crossed the line, the Bruins forward has been very effective at drawing penalties in favor of his team and that is exactly what set him up for success on Saturday night.

Marchand managed to steal the puck away from the Stars and that drew a penalty from Stars defenseman Roope Hintz who denied Marchand a shot at what would have been a clear breakaway. Thankfully the officials on the ice saw things the same way and as a result the Bruins were not awarded with a 2 minute man advantage, but were instead granted a much deserved penalty shot.

As is often the case with Marchand, simply getting the job done is not enough. Marchand also rubbed a little salt in the wound as well when he showboated with a bit of a subtle shoulder shrug after hitting the back of the net. It may have gone unnoticed by many watching at home or even those in attendance on the night, but I would be willing to bet that it did not go unnoticed by the members of the Dallas Stars bench.

Here's a replay of the goal itself:

The reaction from the crowd at TD Garden was something to behold as well. It has become clear as we have seen fans packing back into NHL arenas that fans have been starved for live sporting events for some time now, and I'm very happy that things have returned to a state where this is again possible. Hearing the reaction of the crowd Boston tonight was wonderful.