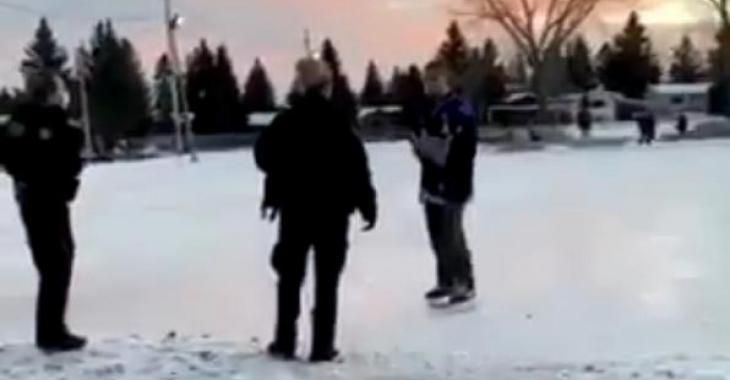 We have a disturbing video to share with you this morning and unfortunately at the moment we are lacking a great deal of context.

A video published this morning on social media appears to depict Canadian law enforcement officers from the Calgary area violently arresting a man who was playing outdoor hockey at the time with a group of other men. The video was shared by George Seguin-Morin who identifies himself as a man from the Calgary area who is "friends" with the man being arrested in the video.

The disturbing video begins with two female police officers approaching a man skating on the ice and shows an ongoing discussion between the 3 parties. According to Seguin-Morin's testimony, the group of players had been warned to leave the ice over a health code violation, one no doubt related to the ongoing pandemic, but the man seen engaging with the officers wanted more information before leaving the playing surface. Specifically, again according to the testimony of Seguin-Morin, the man wanted to know what section of the health code their outdoor game had violated. During the man's conversation with the officers his friends behind the camera can repeatedly be heard calling on him to leave the ice, instructions that no doubt mirror what he is being told by the two officers, but the situation suddenly escalates when one officer, seemingly for no discernible reason, brandishes a taser.

From there the men continue to yell at their friend to leave, but the officers begin to physically restrain him and the confrontation continues to escalate. The unidentified man does not comply with the officers who are unable to bring him to the ground, and they then begin to strike him repeatedly with knees to the legs and groin area. Things even get so bad at one point that one of the officers points her taser at the man.

Update: The publisher has taken the original videos down and now has only made one of the videos public.

The confrontation then continues from that point with the two officers screaming at the man after repeatedly failing to bring him down to the ground. He does however eventually relent and allow the officers to take him to the ground, where they continue to struggle with him even after a third officer arrives to sit on the man's legs towards the end of this second video.

Update: Only the one video remains

Seguin-Morin now claims that his friend was "assaulted" for merely asking a question and has appealed to both media and Calgary police to intervene in this matter.

Let us know what you think of this unfortunate situation.

Canadian government may once again deny the Lightning their special moment.