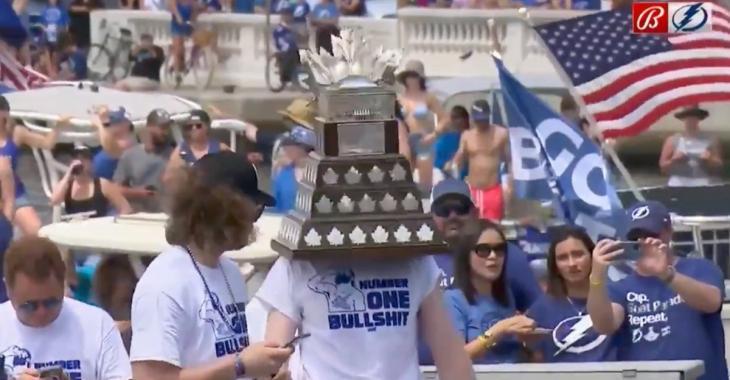 The Tampa Bay Lightning had their own version of a Stanley Cup parade on Monday when they held what turned out to be quite a large boat parade in honor of their second straight Stanley Cup Championship title. Hockey players have always been known to get a bid rowdy when they are out celebrating so you knew there were going to be some fun moments during today's parade, but I don't think anyone could have predicted what we would get today from this rowdy bunch.

Of course there was plenty of cheering, yelling and of course plenty of beer, but the Lightning also gave the fans who were in attendance an extra special show. One of the highlights of the day so far has to be Lightning star goaltender Andrei Vasilevskiy turning the Conn Smythe Trophy, one of the most prestigious awards in the sport of hockey, into his very own fashion accessory. Vasilevskiy was seen holding the trophy above his head and in a moment of apparent inspiration he decided to plop the trophy down on his head and wear it as a hat. The best moment came when Vasilevskiy decided he would start dancing, on the boat, with the Conn Smythe over his head presumably making it impossible for him to see what he was doing.

No one will be surprised to learn that Lightning star forward Nikita Kucherov was also having himself a grand old time during the parade. The Lightning superstar delivered another classic shirtless interview where it was clear he was only mildly interested in the questions being put forth by the reporter, and to top it all off he and his cohorts sent the reporter off with a huge beer shower, leaving him soaked in suds.

Not everyone was so wild though and there were a few members of the Lightning spotted having what can only be described as just good wholesome fun. In this clip you can see Steven Stamkos chucking a football from one boat to another while teammate Alex Killorn jumps off the boat to make the catch.

It is great to see both players and fans out in the world, having a good time, and enjoying some semblance of normal life again.