Videos : Jujhar Khaira takes out Oliver Kylington with a big hit to the head.

Published on Monday, March 15 2021 by HockeyFeed in Videos 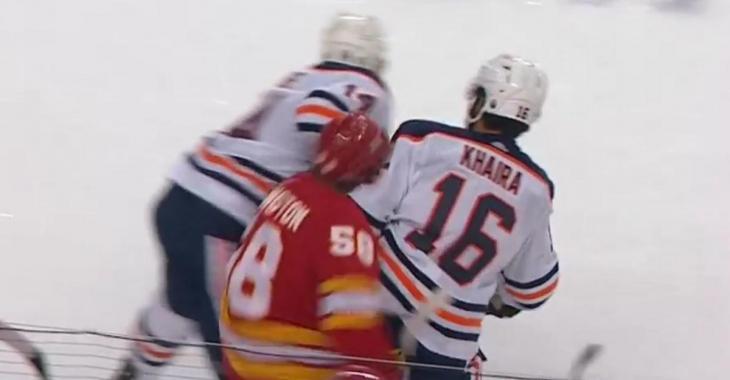 The Battle of Alberta wrote its latest chapter on Monday night when the Calgary Flames and the Edmonton Oilers faced off against one another, and this hit certainly did nothing to smooth over the hatred that these teams share for one another.

The hit, which came courtesy of the Oilers' Jujhar Khaira, was delivered to the head of the Flames' Oliver Kylington and there's no doubt that it evoked the anger of the Flames. There's little argument that this was a direct blow to the head, and although Kylington's body position played a role in the hit catching him up high, this one could almost certainly have been avoided.

It would not be long before the Flames were out looking for revenge however, and that revenge came in the form of National Hockey League veteran Brett Ritchie. Ritchie would drop the gloves with Khaira less than midway through the games very first period, setting the stage for what will no doubt be another eventful night between these two bitter rivals.