Norris got the better of the exchange. 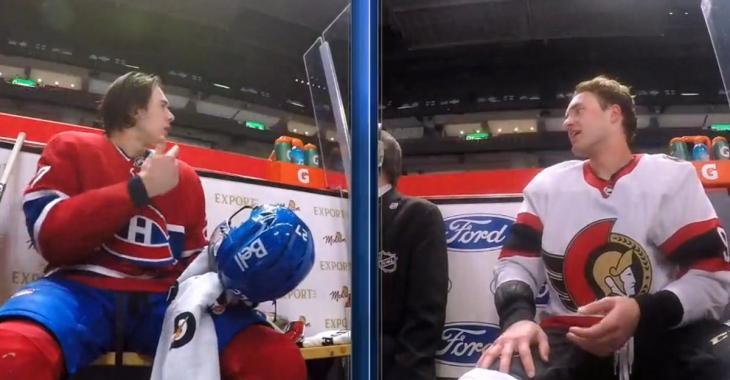 The Montreal Canadiens and the Ottawa Senators put on a pretty good show for their fans on Saturday night in what turned out to be a hotly contested game by the time the third period had rolled around, and perhaps no one put on a better show than Habs defenseman Alexander Romanov and Sens forward Josh Norris.

The two men squared off in what was a heated and spirited exchange during the game's second period after Romanov leveled Norris with a pretty big hit, one that Norris appeared to take exception to. I say heated because despite the best efforts of the National Hockey League officials on the ice to deprive of us this battle between the two young men, both Romanov and Norris appeared eager and ready to go. Neither man was willing to let the other walk away without some measure of retribution and as a result after a few attempts to separate the two the officials on the ice finally let them go.

In spite of that however it seemed as though Romanov was still relatively unprepared for the exchange, something made evident by the fact that he still had his gloves on when the two men started to throw blows. It was Norris who would get the better of the exchange however, perhaps due in part to the fact that Romanov seemed a little confused, and after landing a few clean shots onto his opponent he left some noticeable damage on his face as well. As the two men were split apart a noticeable crimson streak could be seen on the nose of Romanov, the most noticeable damage from the exchange.

Norris however was keen to add insult to injury and he did so after the two men were led to the penalty box by the officials on the ice. Once inside the box the cameras caught Norris laughing repeatedly before he eventually turned his attention to his opponent. Although we will likely never know what was said, and frankly there's a good chance Romanov didn't understand any of it anyways, Norris' body language gave away what he was doing. He got the attention of the Canadians defenseman and repeatedly pointed at his own nose, clearly letting Romanov know that he had seen the damage done by his fists.