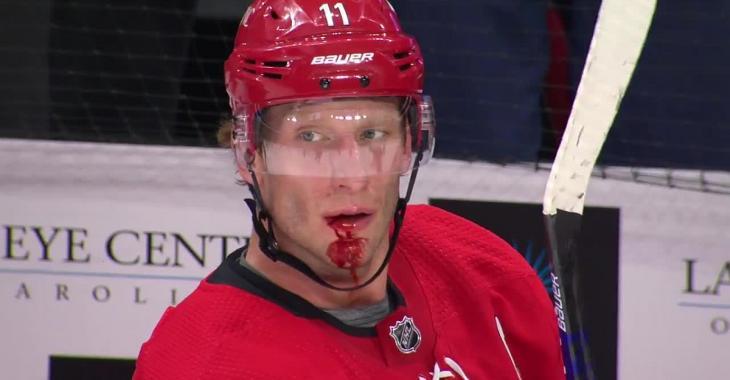 The Carolina Hurricanes seem none too pleased about this and frankly I can't blame them.

On Sunday evening the Hurricanes faced off against the Dallas Stars and during the first period of that game Hurricanes captain Jordan Staal's face was turned into a crimson mask after he was the victim of a relatively blatant high stick. It made for a gruesome picture on the broadcast and it was made even more shocking by the fact that it was, somehow, missed by the National Hockey League's referees who are now once again facing some heat from fans.

Staal was injured when he was struck in the face by the stick of Dallas Stars veteran forward Joe Pavelski, and what made the incident so blatant to my eyes was the fact that Pavelski was on his knees at the time that he struck Staal in the face. You can imagine what a player high sticking another player in the face from his knees would look like, and you would think something like that would catch the eyes of the officials.

Here's a replay that shows both the damage to Staal's face after the fact, as well as the actual high stick that caused the damage.