Drouin makes his highly anticipated return to the Bell Centre. 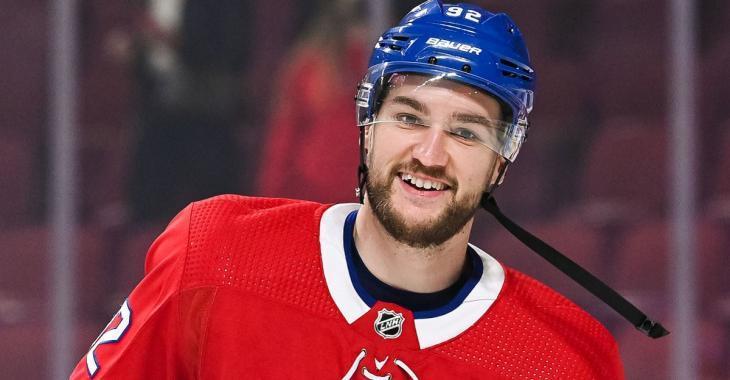 The Montreal Canadiens hosted the New York Rangers in their home opener on Saturday night and with a packed house there was one moment in particular that many were anticipating, the return of forward Jonathan Drouin to the Bell Centre for the first time in a meaningful game in several long months.

As is always the case the Canadiens spared no expense for their home opener, putting on a terrific show for the fans who were in attendance with a full crowd for the first time since the start of the pandemic. The Canadiens put on a great production and introduced their players one by one, with Drouin being the last man announced to the crowd.

Exactly as you would have expected from the Canadiens' passionate fan base, Drouin was greeted with a roaring ovation that had every fan in the building on their feet and waiving their white towels in appreciation.

Drouin was already a popular player it's true, but this particular level of support from the crowd comes as a direct result of the tumultuous season that he had with the Canadiens during the 2020 - 2021 campaign. The 26 year old native of Sainte-Agathe, Quebec took a highly publicized leave of absence from the team, one that was believed to be related to Drouin's own mental health and personal well being. Given the difficult time the forward went through, including missing out on his chance to play in a Stanley Cup Final with the Canadiens during the 2021 Stanley Cup Playoffs, it was no surprise to see the Habs faithful rally behind one of the organization's core players.

The fact that Drouin is back with the team is a sign that whatever was ailing him has been dealt with, and one can only hope that the love that he was shown this evening will help keep him in a more positive place than the one he found himself in last season.

Drouin has already played two regular season games for the Canadiens since his return this season, both of which were played on the road and proved to be losses for the Habs, and thus far he has picked up a single point, a goal.

TNT botches NHL announcement, confuses Andrew Ference for Connor McDavid
Subscibe to
Our NEWSLETTER
Receive the best articles of the web directly in your email