Videos : Jason Robertson scores possibly the most ridiculous shootout goal of all time.

Jason Robertson scores possibly the most ridiculous shootout goal of all time.

Published on Monday, April 5 2021 by HockeyFeed in Videos 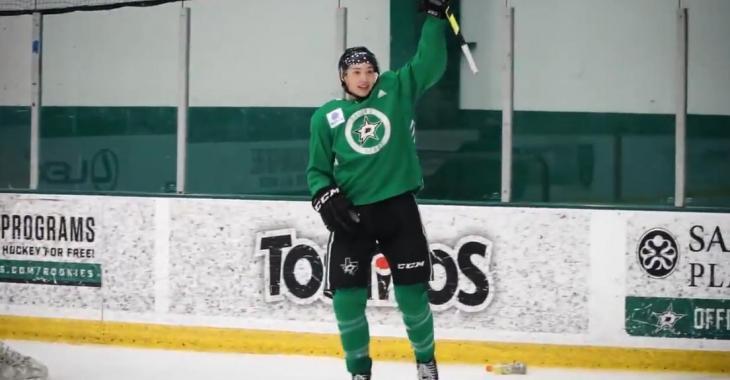 I wonder if we will ever something like this during a live game?

On Monday morning the Dallas Stars, like many other teams around the National Hockey League, took to the ice for what was a pretty standard morning skate. There was nothing particularly unique or interesting about this practice from the Stars, that is until we got to a point in which their players began to practice some of their moves for the shoot out.

Now normally you might have expected one of Dallas' top stars to steal the show, players like Tyler Seguin or Jamie Benn for example, but it was actually 21 year old forward Jason Robertson who stole the show with a move I personally have never before witnessed in a shoot out. Instead of using some slick deke or some type of wicked shot, Robertson instead used his brain, hand eye coordination, and a little geometry to make this one a reality.

Now I don't think this one would count during an official shoot out, although it is such a unique type of play that I must admit I am not 100% sure on that although I suspect that is how the NHL would rule on the matter, but it could certainly be used in other situations. The problem there of course is if you were to attempt this on a breakaway and missed, you would probably be laughed out of the building and I suspect that your coaches would not be too pleased about it either. That being said Robertson was clearly confident in what he was doing here, and he nailed it no less, so perhaps we see it again one day in the future during a live game.

Oh and the best part? Him holding his arms out wide after the goal as if to ask "what?"