Videos : Jack Hughes throws his stick into the crowd after incredible OT winner.

What a season debut. 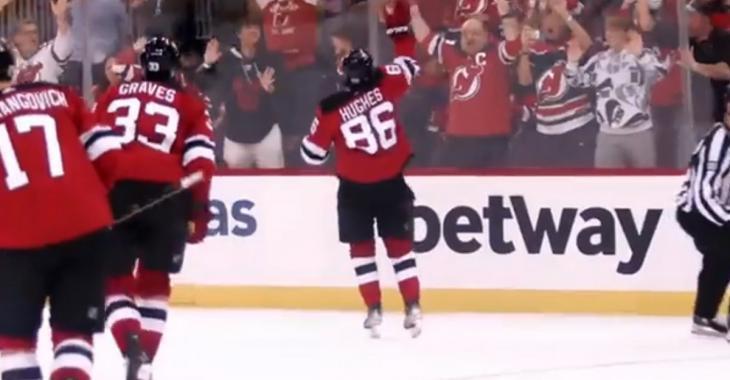 The New Jersey Devils' could not have asked for a more perfect way to kick off their regular season in the 2021 - 2022 National Hockey League campaign.

On Friday night the Devils faced off against the Chicago Blackhawks in what turned out to be an action packed season opener for the Devils. It was a hard fought game through 60 minutes of play but by the time regulation time had wound down to 0 on the game clock we had still not determined a winner with a score of 3  - 3 between these two. That meant we were headed to overtime and it was there that New Jersey Devils star forward Jack Hughes would have what will no doubt go down as one of his career highlights in the NHL.

With everything tied up in overtime Hughes decided to take it upon himself to ensure the win for his Devils in their first game of the season, and he did so in spectacular fashion. Hughes confidently skated up the ice with the puck and, although he would later tell reporters that a million different options went through his head, it looked as though Hughes was thinking shoot the whole way. The former Devils first overall pick in 2019 skated over the Blackhawks blue line after carrying the puck across the neutral zone and proceeded to undress the Blackhawks defense and Blackhawks goaltender Kevin Lankinen who was in net at the time. Hughes dangled long enough to create a wide open net for himself and then seemed to wait patiently until he was completely sure of his success and drove the puck into the back of the net.

As if that wasn't enough to bring every single fan in the Prudential Center up to their feet, and it most certainly was, Hughes also topped it off with a pretty incredible celly. The 20 year old skated over to the protective glass where a group of Devils fans were going crazy over his goal and casually tossed his stick into the crowd, sending the already excited crowd into a frenzy.

It seemed to bring the same energy out of his fellow Devils as well, as Hughes quickly found himself mobbed by his teammates.

Here's another great angle from the Devils:

A dozen NHLers placed on waivers today, one player from yesterday claimed
Subscibe to
Our NEWSLETTER
Receive the best articles of the web directly in your email