Videos : Jack Campbell shaken up after Matthew Tkachuk falls on him. 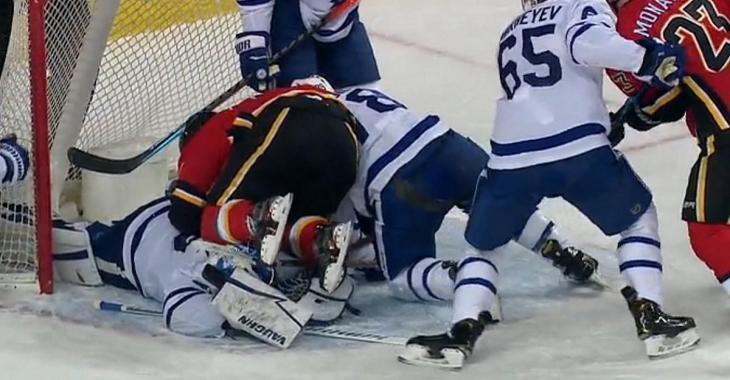 The Toronto Maple Leafs got away with one on Sunday afternoon after it looked like goaltender Jack Campbell was shaken up during the final moments of their match up against the Calgary Flames.

The Leafs were holding off an offensive push from the Flames, who were trying to close the gap late in the third, when a big scramble in front of the Maple Leafs net resulted in Campbell feeling the worse for wear. The incident that left Campbell down on the ice came courtesy of Calgary Flames forward Matthew Tkachuk, so you know that fact alone had the Leafs riled up when it occurred.

It's hard to see exactly what goes down, or whom may have made contact with home, during the wild scramble in front of the net. What we can tell you however is that Tkachuk falls right onto Campbell's head and back, in fact it looks as though Tkachuk knee may have actually landed on the back of Campbell's head, making this a very scary incident indeed.

Some have been quick to call this intentional on the part of Tkachuk, but with the confusion in front of the net I do think it's hard to tell if anything may have knocked him off balance. Here it is again in slow motion.

Although Campbell appeared to be quite shaken up in his net, showing obvious signs of pain and discomfort, he would opt to remain in the game and even after heading over to the Leafs bench he never gave an indication that he was trying to get off the ice. In spite of staying in however it was obvious that Campbell was still feeling the ill effects of having a grown man fall onto his back while he was sprawled out on the ice, so it will be interesting to see if any updates on his condition are released this evening.

As you would expect following such an incident, especially one that came so late in the game, Tkachuk drew a crowd after the final horn sounded. Although there was nothing much that would come of it, I suspect that we will see this play out once again on Tuesday when these two teams will go head to head once again.

Riley Sheahan records the first preseason goal in Seattle Kraken history.
Subscibe to
Our NEWSLETTER
Receive the best articles of the web directly in your email