Videos : ICYMI: Ryan Pulock's game-saving save with just 2 seconds on the clock. 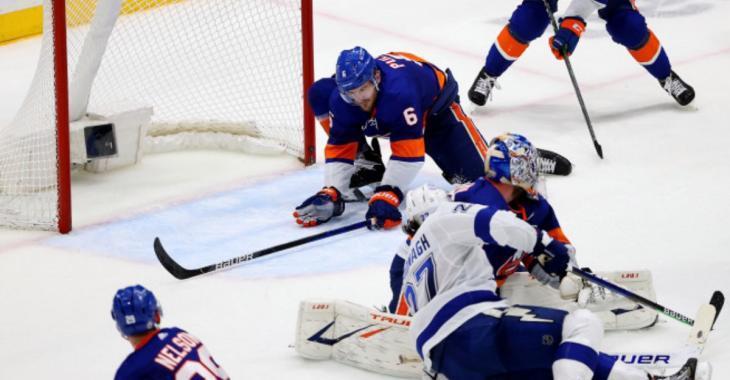 If you didn't tune in for Game 4 of the Stanley Cup Semifinals between the Tampa Bay Lightning and the New York Islanders on Saturday night, or if you tuned out after the second period when the Islanders appeared to be cruising to a 3 - 0 victory, then you missed one of the most breathtaking finishes to a game I have ever seen in the playoffs.

Despite the Islanders taking what looked like a commanding lead in the second the Lightning rallied back in the third period with two unanswered goals and came about as close as you can possibly get to mounting the comeback. The game quite literally came down to the final seconds of the third period and it was Lightning defenseman Ryan McDonough who looked like he would play the hero after fooling one defenseman and Islanders goaltender Semyon Varlamov with a beautiful spin o rama type move. The move left the net seemingly wide open for McDonough but unfortunately for the Lightning there was another player determined to be a hero on this night.

That player was Islanders defenseman Ryan Pulock and I suspect that his heroics in Game 4 will be enough that fans in Long Island will remember him fondly for the remainder of his career and beyond. With what looked like a sure goal in sight for McDonough, Pulock dove in front of the Islanders net at the last possible second and with just 2 seconds remaining on the game clock made the save of the night. It was a heartstopping play on the part of Pulock and no doubt it proved to be a true heartbreaker for the Lightning who had fought so valiantly in the third to mount their attempt at a comeback.

You could hardly believe that it had happened when watching it in real time, and for that reason every single eyeball in the building was focused on the big screen above the ice when the National Hockey League broadcast showed the replay of the moment in the arena. The Islanders tweeted out this photo, which really captures what a special moment everyone was witnessing on the replay.