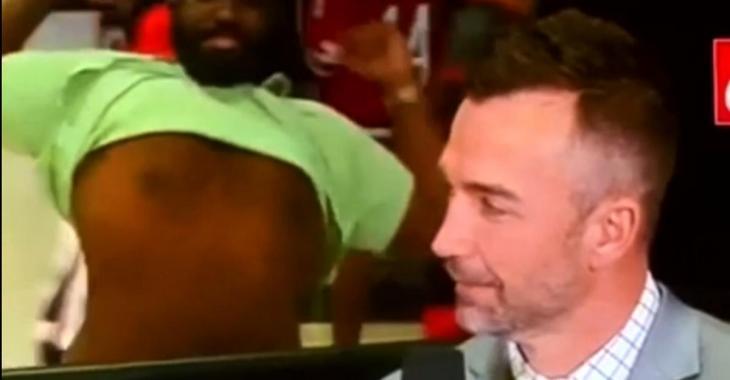 The National Hockey League has not been anywhere near as entertaining a product this year as it has in the past for me and I am 100% convinced that the reason for this is the lack of atmosphere that is normally present during games. This of course has come as a direct result of fans not being in the building for the majority of the games this season, but some select teams like the Carolina Hurricanes have started to let fans back into the building.

On Sunday night we got a pretty good reminder of that fact when one fan in particular decided he was going to have a little extra fun on his way out of the building, and although it was a silly thing to do I have to admit it put a huge smile on my face. The fan in question, a man that looked to be roughly in his thirties if I had to venture a guess, showed up in front of the glass that was right behind the analysts doing the post game show and decided he was going to show off a little extra for the fans watching at home.

The man proceeded to lift up his shirt and shuffle across the length of the window pane, in clear view of the camera and in clear view of the analysts on the desk as well. How do I know they could see him while he was standing behind them? Well former National Hockey League player Shane Willis is a part of the Hurricanes broadcast this year and his facial expression told the entire story.

As the man shuffled back and forth Willis, who did an excellent job of keeping a straight face during the show, finally cracked a smile as the belly dance and shuffle combination simply became too much for him to contain. To his credit he immediately went back into serious mode when the conversation was thrown back his way, with not even so much of a hint of a smile or a hint that anything had happened at all on his face.

Unfortunately the only video I've been able to track down so far isn't the best quality, but it does an excellent job of showcasing what happened.