Videos : Goalie fight breaks out at center ice after a crazy brawl in the ECHL!

A pretty one sided affair. 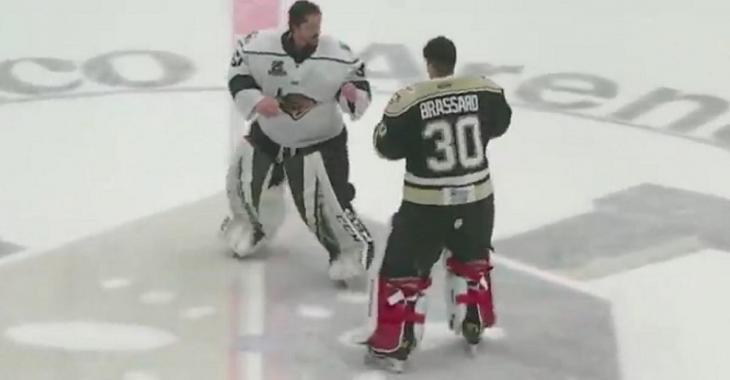 The officials had their hands full in this one and then some.

On Sunday afternoon the Utah Grizzlies and the Wheeling Nailers of the ECHL faced off in what turned out to be a total blowout on the part of the Nailers. Although the Grizzlies managed to produce some offense with 24 shots on goal, Nailers goaltender Francois Brassard stopped 23 of those shots to lead his team to a lopsided 6 - 1 victory over the Grizzlies.

Although Brassard had himself a strong showing in net, it will be his performance at center ice on the evening that will likely be landing him on all the highlight reels. During the final moments of the game, with less than 10 seconds to go on the clock in fact, the game developed into something of a wild brawl on the ice, one that gave the officials all that they could handle.

While the officials were busy trying to wrangle the unruly players out on the ice however Brassard and Utah Grizzlies netminder Kevin Carr signaled to one another that they wanted to get in on the action, and get in on it they did. Much like the game itself however this one proved to be a rather one sided affair, with Brassard seemingly landing all of the offense in this one, or at the very least all of the meaningful offense. Even in the final moments of the fight Brassard toss Carr to the ice with something closely resembling a judo throw, one that probably didn't feel too good for Carr who was on the receiving end of an awkward fall to the ice.

David Pastrnak opens the second round with a hat trick against the Islanders.
Subscibe to
Our NEWSLETTER
Receive the best articles of the web directly in your email