Published on Sunday, March 7 2021 by HockeyFeed in Videos 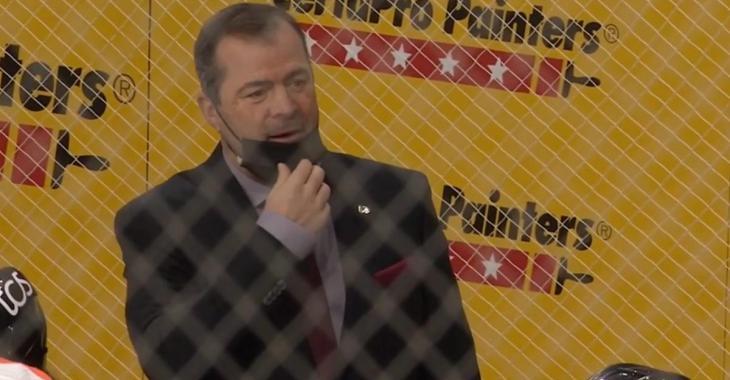 Although it probably didn't feel like a very special moment for the Philadelphia Flyers at the time, I bet when they look back on this one in a couple of days, or even a few hours, they will appreciate it.

On Sunday night the Flyers were facing off against the Washington Capitals and in the closing minutes of the first period the Flyers were the victims of a rather terrible call by the National Hockey League's on ice officials. Flyers forward Travis Konecny was called for goaltender interference with just 4 minutes left to go in the period, but the problem for the officials came when the replay of this "interference" was shown on the big screen.

The replay revealed that Konecny had not run the goaltender, but that he in fact had stopped short to make sure he avoided doing so. It was at that moment that Konecny was bumped by Capitals forward Evgeny Kuznetsov and it was this contact with Kuznetsov that sent him towards the Capitals netminder. As if that wasn't enough, Konecny was then shoved again by Capitals defenseman John Carlsson, effectively forcing him into the goaltender.

The Flyers were, understandably, very unhappy with the call and Flyers head coach Alain Vigneault even pulled his mask down to give the referees a piece of his mind. Thankfully for Vigneault he was not alone in his criticism of the officials however, because on Sunday night the Flyers had fans in attendance for the very first time all season. Fans of professional sports franchises in Philadelphia have of course earned quite the reputation over the past several decades and they did not disappoint on Sunday, audibly letting the officials on the ice have it in spite of the fact that there was only a limited number of them in attendance.

The boos from the fans were also clearly audible on the live game feed and they did not relent, but in spite of all that Konecny of course still went to the box. The Flyers broadcast team made sure to call out veteran referee Wes McCauley for the bad call on the ice, describing it rather humorously as the "Wes McCauley Special."