Videos : David Pastrnak opens the second round with a hat trick against the Islanders. 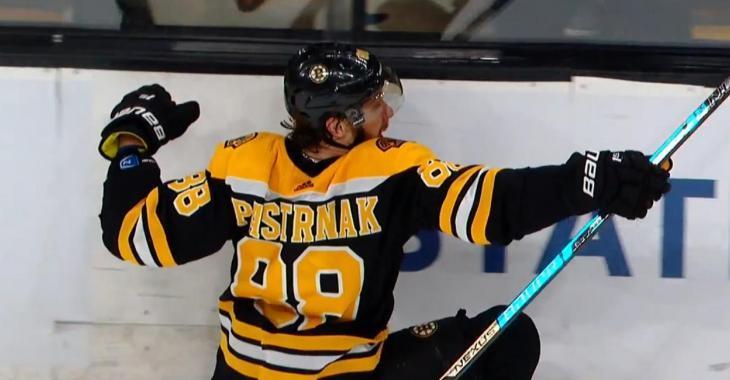 The New York Islanders put up a good fight in Game 1 in their second round series in the Stanley Cup Playoffs against the Boston Bruins, but there was simply no stopping Bruins forward David Pastrnak from quite literally willing his team to victory in this one.

The Bruins star forward could have beat the Islanders entirely on his own in this one, at least as far as the scoreboard is concerned, with a Game 1 hat trick that saw him singlehandedly record more goals than the entire Islanders roster. Pastrnak not only recorded the hat trick for the Bruins but each of his goals came at a clutch moment in the game and no doubt served to rally the morale of both the 18,000 Bruins fans who were in attendance for this one and the Bruins players on the bench as well.

His first goal prevented the Islanders from going into the first intermission with a lead, tying up the score for the Bruins at 1 - 1 in the dying seconds of the games opening frame.

His second goal was also a huge one for the Bruins as it would serve to tie the Islanders goal total for the game and got the Bruins off to a strong start in the second period. Pastrnak recorded this one a little overway midway through the second frame.

The third and final goal of Pastrnak's offensive onslaught came with just a little over 4 minutes left in the game and effectively put the game on ice for the Bruins, giving them a two goal lead with very little time for the Islanders to claw back. This was not an empty netter but instead just another great shot on the part of the Bruins star, one that no doubt put the Islanders on notice for the rest of the series.

I also have to add here that the added ambience of the crowd in this game was absolutely off the charts. The Bruins had the largest attendance of any team in the league for the entire duration of the 2021 National Hockey League season and you could feel it in every big moment.

Ryan Reaves squares up with Vitali Kravtsov in training camp.
Subscibe to
Our NEWSLETTER
Receive the best articles of the web directly in your email