Videos : Crazed hockey fan jumps over the glass to attack a player. 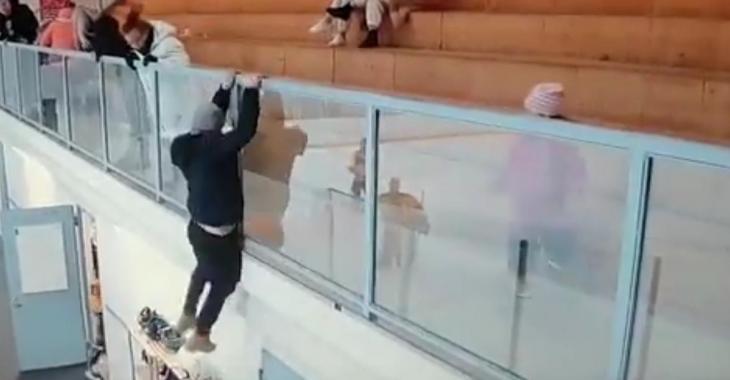 There is a rather incredible video that has begun making the rounds on social media that showcases a wild series of events from a hockey game that was played out in Finand's 3rd division of hockey.

Now I don't have a great deal of details to share with you given that all the conversations contained within this video are happening in a language that I don't speak, but thankfully the camera man behind this recording did an excellent job of telling the story with the images he captured of this rather wild incident.

As you watch the video things begin to get heated when two players on the ice lose their cool and begin to engage in a heated exchange with one another. The players probably went a little overboard, which rightfully led to the official tossing both men off the ice, but as you can see in the video they left everything on the ice. Even after being ejected from the game both players walked back to the locker room alongside one another and that would have been where the whole thing ended.

There was one fan in the crowd however who was not so ready to let this one go, and instead he began yelling at one of the players from the bleachers. I can't tell what was being said here, but according to some of the Finnish fans that have commented on this video there was a moment in which one of the players challenged the fan to come down and say what he had said to his face.

The fan, in a decision he will no doubt regret, decided to accept that challenge and proceeded to launch himself over the glass. If you watch carefully the door underneath him opens a second after he jumps down, had that come any sooner this fan would likely have been spending some time in the hospital as well. For now it sounds like the police were called in to handle this matter, and no doubt charges will be forthcoming for the fan who went too far here.

It is unclear whether or not he assaulted the player once he got into the room, but the video certainly appears to paint that picture.

Rumor: Maple Leafs to make a “big move” ahead of next season.
Subscibe to
Our NEWSLETTER
Receive the best articles of the web directly in your email