Videos : Carter Hutton injured after being run over in net.

Published on Monday, March 22 2021 by HockeyFeed in Videos 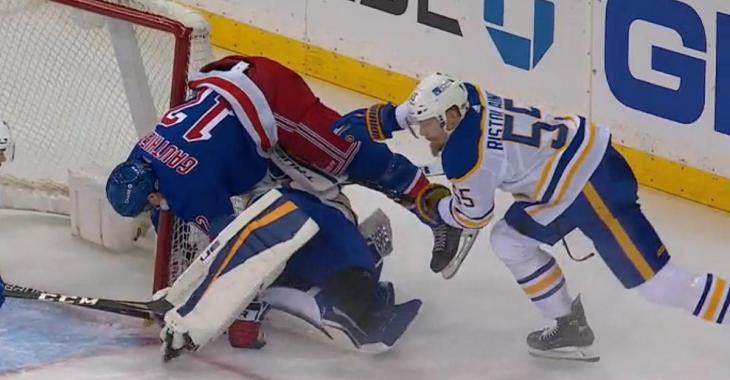 This one looked bad and this could just make an already terrible season for the Buffalo Sabres even worse.

On Monday night the Sabres were facing off against the New York Rangers, and it was just minutes into the game before the Sabres lost goaltender Carter Hutton to what looks like a pretty bad injury. To be clear we don't have an official update on Hutton's status, I'm gauging the severity here purely on the eye test.

The injury occurred when Rangers forward Julien Gauthier bulldozed Hutton in his own net, although I think you would be hard pressed to argue that there was any intent on the part of Gauthier here. The 23 year old winger was driving to the net for a scoring opportunity, and had beat Sabres defenseman Rasmus Ristolainen on the play, when Ristolainen fell onto his back and drove him forward into Hutton.

This resulted in Gauthier crashing hard into the net and more importantly directly into Hutton. It created quite the comical picture as Gauthier ended up draped over Hutton like a towel that had been hung up to dry on a clothesline, however this also caused Hutton's leg to bend backwards under his weight in an ugly and awkward fashion.

There's no question that this was the source of the injury as Hutton was heavily favoring that leg after the impact from Gauthier. To his credit the Sabres goalie tried to skate off the ice under his own power, but he didn't make it very far before he leaned onto the trainer and began to hop on one leg to make his way off the ice. Once he had made his way between the doors Hutton immediately hunched over and looked like he was struggling badly to even hop back to the locker room.

Obviously we will have to wait on an official update before making an official prognosis, but given the fact that the Sabres have no chance of making the playoffs and given the way this looked it seems like he could be out for quite a while.

If you didn't get the chance to catch the play live when it happened, we've got you covered. Here's the replay: