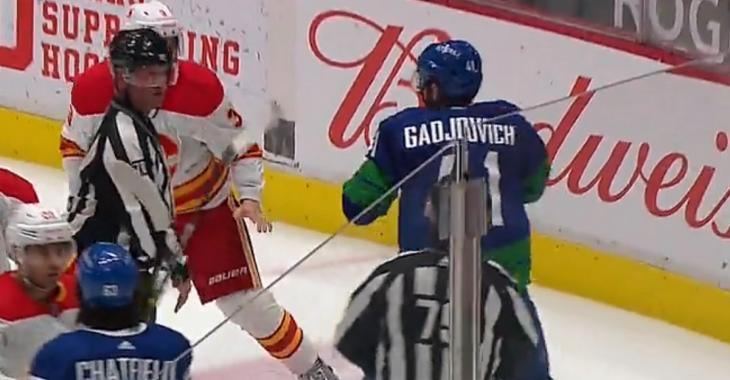 The Vancouver Canucks and the Calgary Flames faced off on Sunday night in what was for many an entirely meaningless game. Neither team is headed for the playoffs this season but due to some of the massive delays caused by the ongoing pandemic this season, the two teams were finishing off their regular season schedule while other teams are currently playing important games in the Stanley Cup playoffs.

I say it was meaningless for "many" because someone apparently forgot to inform Canucks rookie Jonah Gadjovich and Flames rookie Connor Mackey that there was nothing on the line in this one. In spite of the fact that there was nothing but pride to play for in this one, the two rookies would drop the gloves in the second period after Mackey delivered a questionable hit to the back of Canucks forward Matthew Highmore, one that left Highmore in some discomfort along the boards.

Rather than let that type of hit slide, in spite of the fact that he was playing in his first career National Hockey League game, Gadjovich immediately went after Mackey to let him know exactly what he thought of the hit. Despite being a rookie however Gadjovich is no small man and, although he initially took several unanswered blows from Mackey, once he got his arm free he began to land what looked like heavy blows to the head of his opponent. Mackey would land the greater volume of blows over the course of the exchange but it looked to me as though the shots that connected from Gadjovich had a greater impact with Mackey even appearing rocked by the first overhand from Gadjovich, one that came crashing into his face.

I have to give credit to Mackey here as well, in spite of the fact that his hit on Highmore was not very pretty, as he was participating in just his 4th career NHL game in this one. I suspect that there is a reason both men were competing in this one, again a meaningless game, but to their credit they used the platform to leave an impression on both their teams as well as the fans who tuned in on Sunday night.