Maroon's self deprecating humor is on point. 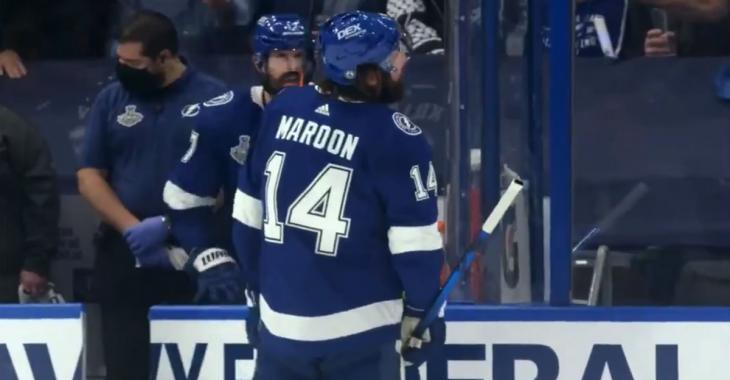 The Stanley Cup Final is on track to be one of the most underwhelming Finals we've seen in a very long time with the Tampa Bay Lightning taking a commanding 3 - 0 series lead over the Montreal Canadiens and threatening a potential sweep in Game 4.

The Lightning have managed this in spite of being outplayed at times by the Canadiens in this series and it may very well be that they have a psychological edge over the Habs at this point in the series. The Lightning certainly have been using the mental aspect of the game as a weapon in this series and recently cameras caught a pretty interesting interaction between Lightning veteran Pat Maroon and Canadiens forward Josh Anderson that does a pretty good job of showcasing some of those mind games.

Maroon can be seen repeatedly taunting Andersen on the bench, labeling him a "fake tough guy" and no doubt a few other colorful words that the editors opted not to show. Unfortunately we don't hear much of Anderson's side of the exchange, although he does tell Maroon to get back on the bench with something that looks like a smile on his face, but we can sort of guess what he said judging by Maroon's responses to him.

At one point Maroon laughs and states that Anderson has as many points as he does himself, clearly something that Maroon believes the Canadiens forward should not be proud of. The fact that Maroon is quite obviously making fun of himself here in an effort to get under the skin of his opponent is rather endearing and I suspect that even fans of the Canadiens will get a good chuckle at his brand of buffoonery.

Whatever the Lightning's game plan has been in this series when it comes to the mental game it is certainly working for them and no doubt Maroon himself is a significant part of that in spite of his relatively limited ice time. They will look to continue that trend when they head into Game 4 on Monday in Montreal where they will look to close out the series by sweeping the Canadiens in 4 straight games.

Sabres talking to Habs about 6 pieces in return in Eichel trade!
Subscibe to
Our NEWSLETTER
Receive the best articles of the web directly in your email