Jack Edwards at it again. 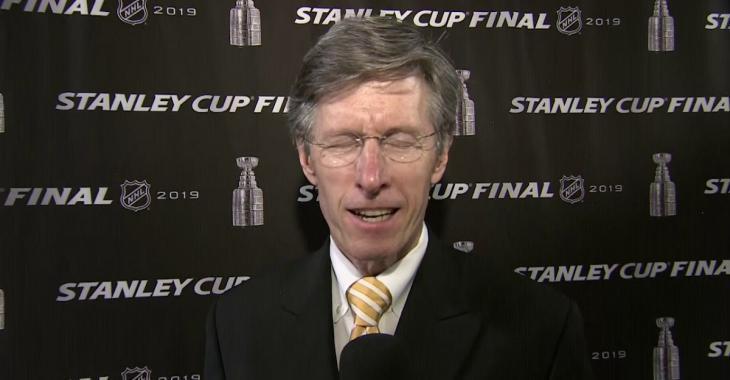 Boston Bruins announcer Jack Edwards once again came into the national spotlight last week when he made comments that ruffled quite a few feathers in Buffalo. Edwards, who has always been known as a partisan announcer, expressed that he viewed the Buffalo Sabres as the National Hockey League's version of a "dumpster fire" and it provoked exactly the kind of reaction you would have expected.

Well on Sunday Edwards was at it again, although this time around his comments seemed much more in line with his usual brand of pro Bruins commentary, something we have no doubt all come to expect of him. In fact I suspect that had it not been for the dumpster fire comments made last week that this would have flown relatively under the radar, but Edwards appears to be under more scrutiny since ripping into the Buffalo Sabres.

On Sunday during a matchup between the New Jersey Devils and Edwards' Boston Bruins, Bruins forward David Krejci was tripped up during a power play by New Jersey Devils forward Pavel Zacha. The play would go uncalled and this caused Edwards to blow a gasket as time ran down in the second period, leading him to go on an uninterrupted tirade regarding the call or lack thereof.

"He gets tripped by Zacha! Obvious trip! Because it's on a power play the refs put the whistles away," said Edwards with plenty of passion in his voice.

Edwards went on to point out how making calls of this nature is not in the best interest of referees in the NHL right now, a group he believes is being heavily scrutinized following the ouster of referee Tim Peel.

"I mean if referring is under scrutiny, look at the last 20 seconds of this period! Gosh!" said a frustrated Edwards. "That is tripping!."

Now don't get me wrong I can certainly appreciate why Jack Edwards is far from being everyone's cup of tea, but there's also a reason fans in Boston love him. If it comes down to choosing between a passionate guy like Edwards, who is an obvious homer, or some unfeeling robot that is going to simply call the action without being invested into the games themselves, I honestly would probably go with Edwards.

You can hear him in his own, frustrated, words in the short clip below.