Videos : Brawl breaks out between fans in the crowd for Game 7.

Fans get out of control in Game 7. 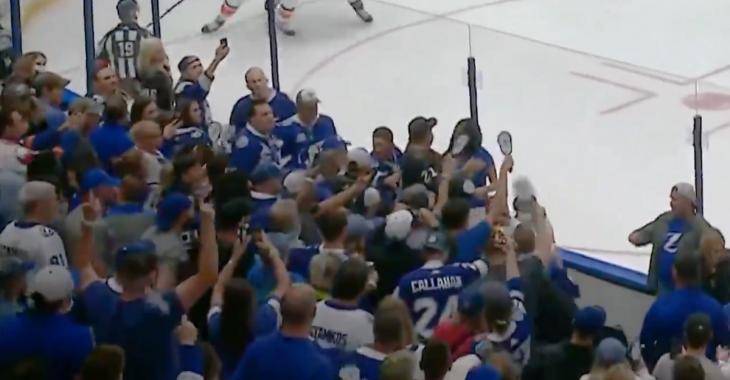 The Tampa Bay Lightning and the New York Islanders put on a great show in Game 7 of their Stanley Cup Playoffs Semifinal series on Friday night, but for some fans in attendance the show on the ice wasn't enough to keep them glued to their seats.

During the third period of the game some sharp eyed observers captured some commotion going on in the lower bowl of the arena, but as you would expect in a situation like this the National Hockey League and their broadcast partners opted to keep their focus on what was happening on the ice. As a result fans who were tuning in live got a very limited view of what happened, we could tell it was a fight in the crowd but as you will see in the video below it was hard to make out exactly what happened.

What you can see in the video however is that there are about a dozen fans holding up their phones as they quickly try and capture the action on their smartphone cameras in an effort to score some points on social media later or simply to show their friends the wild adventure they had during an NHL Game 7. As you would expect in this situation it was only a matter of time before one of those videos made their way online and began making the rounds on social media. We now have one of those videos to share with you and it paints a much clearer picture of what went down during the fight, but unfortunately we still don't know what led up to the whole fiasco.

In this second video we can see that a Lightning fan and an Islanders fan are at the center of the altercation and even go so far as exchanging blows during the altercation. It appears as though the Lightning fan gets the better of the Islanders fan here, knocking off his glasses with one of his punches, although neither man will walk away from this situation feeling very good about themselves.

If you do attend a game in the Stanley Cup Final, please don't be these guys.

Skinner gets a breakaway with no stick, Rangers end up scoring on the play
Subscibe to
Our NEWSLETTER
Receive the best articles of the web directly in your email