Videos : Brady Tkachuk and Shea Weber drop the gloves at the end of the first!

The youngster vs the veteran. 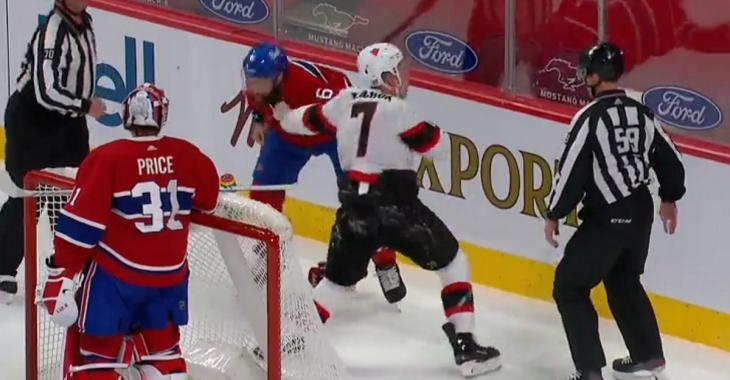 You could be forgiven for not tuning in to tonight's game between the Montreal Canadiens and the Ottawa Senators, after all right the Canadiens are hanging on to a playoff spot thanks in large part to how bad the other 3 teams in the division are and the Senators are one of those 3 teams, but if you skipped it you missed a pretty awesome event in the game's opening period.

After some tough battles throughout the opening frame, veteran Canadiens defenseman Shea Weber and young Senators forward Brady Tkachuk decided that they had both had enough of one another and dropped the gloves. Based on the sequence alone it seems fair to suggest that Weber was the instigator here, knocking Tkachuk down in front of the net and even pinning him down with an extra crosscheck to the back as he was standing over him. To his credit though Tkachuk was not going to take the abuse laying down, even if it was from a guy recognized as one of the most physical players in the league, and he immediately got back up and into Weber's face.

Both men tied each other up pretty well here so there wasn't much in terms of damage delivered on either side, although both players managed to get some shots in during the exchange. Weber was on the offense early on loading up huge punches as he waited for Tkachuk's head to pop up and become a target, while Tkachuk on the other hand appeared to be more interested in keeping Weber at a distance and getting his shots in during their scrambles for position.

In the end Tkachuk would knock Weber off balance by shoving him in the net, a move that would send Weber tumbling down into the net and onto the ice.

Full credit here to Tkachuk for taking on such a tough customer, there are not a lot of young guys that would willingly take on Shea Weber, and it is  perhaps a sign of the things that we can expect down the line from him when he grows into his body and becomes a more established veteran in the National Hockey League.

Lafreniere is off to the worst start for a No. 1 overall pick since 1999

Bad news for Tyler Toffoli and the Habs.
Subscibe to
Our NEWSLETTER
Receive the best articles of the web directly in your email