Videos : Benn & Brown drop the gloves in epic back and forth battle.

What a performance from both men. 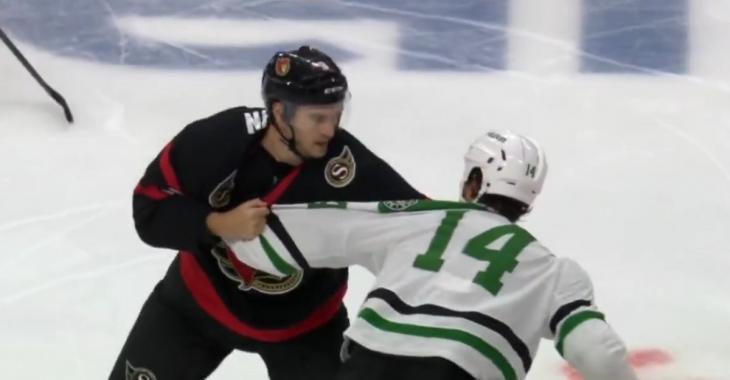 These two men put on one hell of a show for the fans tonight.

In the modern era of the National Hockey League we see players engage in fisticuffs relatively rarely when compared to the league historically, and even when they do it tends to be a relatively quick affair. Every once in a while however we do get a pretty good tilt thanks in part to willing combatants and the willingness of the NHL's officials to let things go, and tonight just happened to be one of those nights.

In the opening seconds of the Sunday night matchup between the Ottawa Senators and the Dallas Stars, we saw a clash between Stars captain Jamie Benn and Senators defenseman Josh Brown and it was not one for the faint of heart. The two men put on an epic show for the fans in attendance and those watching at home, slugging it out with seemingly no end in sight. Both men threw heavy bombs at one another and both men connected with some pretty solid shots during the exchange, but neither man was willing to go down.

Early on it was Brown who appeared to have the advantage with Benn being pretty well tied up, but when Benn switched up his punching hand he began to rain punches of his own down on the Senators blue liner. Benn connected with one shot that rocked Brown's head back, but to his credit Brown himself responded during a flurry of punches from Benn and tagged the Stars captain with a big shot of his own.

I feel like a lot of credit should go to the officials on the ice for letting this one go on, uninterrupted, for as long as they did. As a result not only did the fans get a great show but both men also appeared to punch themselves out with the two hugging it out at the end of it all. When it was all said and done the the league's officiating crew stepped in between the two fighters to lead each man away to their respective penalty box.

Benn and Brown were treated to a thunderous ovation from the crowd for their efforts.

Rangers sign enforcer Ryan Reaves to a contract extension.
Subscibe to
Our NEWSLETTER
Receive the best articles of the web directly in your email