Not a good look for the Predators. 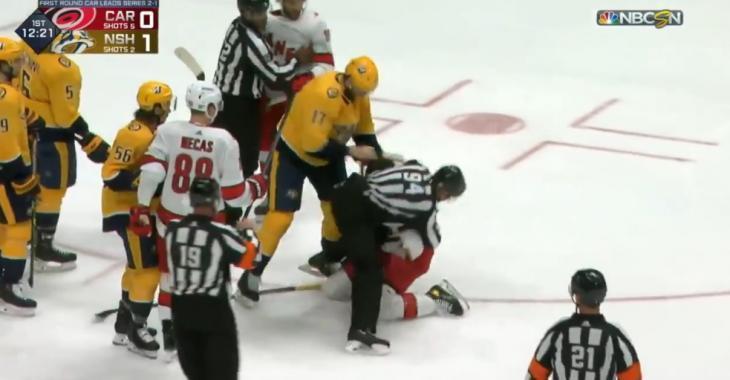 This is not a good look for the Nashville Predators and I suspect that if the National Hockey League decides to look at this it could mean big trouble for veteran defenseman Ben Harpur moving forward.

On Sunday the Predators played the Carolina Hurricanes in what was an absolutely thrilling Game 4, one that saw 7 total goals scored and one that needed double overtime to determine a winner. This highlight however was from the early moments of the game, less than 8 minutes into the game in fact, and it appears to show Harpur getting physical with one of the NHL's linesman.

Harpur, who was engaged in some rough stuff with Hurricanes forward Nino Niederreiter, appears to shove the official from behind while the official was hard at work trying to seperate the two players. Now I will give Harpur the benefit of the doubt here, it may very well have been that Niederreiter did something that caused Harpur to lurch forward in the moment but this angle certainly does make it look like Harpur was giving the linesman a shove from behind.

The National Hockey League has always come down hard on players who get physical with their on ice officials, regardless of the level of physicality involved, and the league's rules clearly state that any player getting physical with an official will be subject to an automatic game misconduct. Thankfully for both Harpur and the Predators the linesman was either too preoccupied to notice or simply opted not to enforce the rule because of the implications of ejecting a defenseman in the opening period of a critical playoff game.

Either way Harpur may have been very lucky to get away with one here, but again I do wonder what may come of this if the league does decide that Harpur did in fact intentionally shove the linesman as he tried to separate him from Niederreiter.

As per NHL rule 40, Harpur should have been given a misconduct which would lead me to believe that a one game suspension, at minimum, would be in order if the league does indeed decide to step in and intervene in this matter.