Videos : Aaron Ekblad carried out on a stretcher after suffering a horrific looking injury. 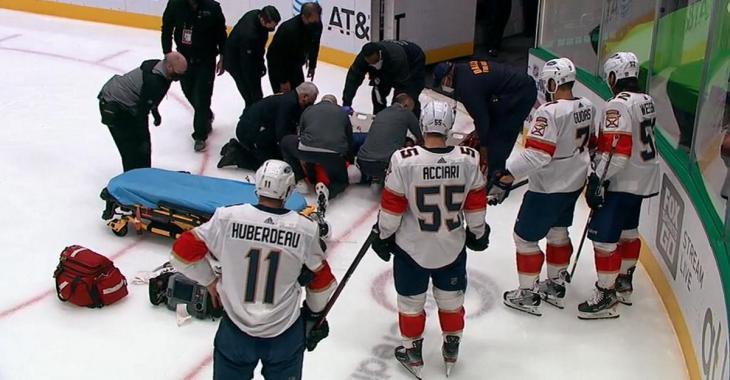 The Florida Panthers have just suffered a big time loss, and it may be one that will impact them for the long term.

On Sunday, at almost exactly the midway point between a game between the Panthers and the Dallas Stars, Panthers defenseman Aaron Ekblad suffered a horrific looking leg injury when he fell awkwardly along the edge of the boards. The injury at first glance appears to be quite serious, although to be clear that is only speculation as we have not had an official injury update on Ekblad yet.

Ekblad went hard into the boards and the edge of his right skate appeared to get caught along the boards, causing him to sort of hop awkwardly. This caused all of his body weight to come crashing down on his left leg, but instead of planting firmly on his skate, his leg bent at an awkward angle before the full weight of his body caused it to bend at a stomach churning angle.

The announcers on the broadcast speculated that this could potentially be the end of the season for the Panthers' star defenseman and although I would call that a premature evaluation this certainly looks like the kind of injury that could be season ending.

Ekblad's body language also makes this one seem quite serious. The Panthers defenseman was in agony, covering his face as if to prevent the cameras from seeing the pain on his face, but to his credit he managed to speak coherently to the doctors who were tending to him. It really is a credit to his toughness that he was able to keep a level head when speaking to the medical professionals while quite literally writhing in pain on the ice.

We will strive to keep you up to date on all the latest concerning this injury, so stay tuned.

Here is a longer sequence: