Published on Friday, March 5 2021 by HockeyFeed in Other Sports 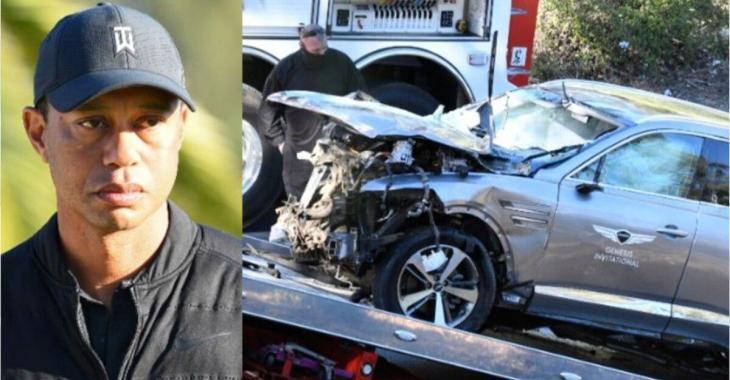 Earlier this week, the Los Angeles County Sheriff’s Department executed a search warrant to get data from the so-called “black box” from the SUV that Tiger Woods was driving when it crashed last week. Last Tuesday, Woods was involved in a single-vehicle car roll-over. The star golfer’s vehicle sustained major damage and Woods had to be extricated from the wreck with the ‘jaws of life.’ The 45-year-old golfer was rushed at the hospital for surgery after sustained several serious injuries to his legs. Woods was the driver and only occupant of the vehicle. He was traveling north on Hawthorne Boulevard at Blackhorse Road when he crashed his Genesis GV80 SUV. Aerial images from the scene of the crash showed Woods’ vehicle lying about 30 yards off the road on its side.

On Friday, CNN and USA Today obtained documents that confirm that Woods was unconscious in the immediate moments after his single-car crash and later told authorities at the scene that he didn’t know how the accident occurred and that he didn’t remember driving at all.

According to a search warrant for the vehicle’s black box, Woods was pretty out of it when deputies arrived to the scene of the crash in Rancho Palos Verdes on the morning of Feb. 23. Here is how the documents read per CNN:

“The documents, obtained by CNN, said Woods regained consciousness before sheriff’s deputies arrived at the scene of the crash. While he remained sitting in the driver’s seat of the vehicle with blood on his face and chin, Woods told the deputies he had no recollection of driving or how the collision occurred.

A witness also approached the vehicle after hearing the crash and noticed Woods was “unconscious and not responding to his questions,” Deputy Johann Schloegl, the traffic collision investigator on the crash, wrote in the affidavit.”

Authorities have said that there is no evidence that Woods was impaired by drugs or alcohol at the time and Los Angeles County Sheriff Alex Villanueva initially declared the single-car crash to be “purely an accident.” However, the department wants the car data in the black box to determine if criminal charges are necessary, for example if there was any reckless driving, if somebody was on their cell phone or something like that.

Back in 2017, Woods checked himself into a clinic for help dealing with prescription drug medication after a DUI charge in Florida.

Woods underwent a lengthy surgery in order to stabilize shattered tibia and fibula bones in his right leg. A combination of screws and pins were used for injuries in the ankle and foot.

It was the 10th surgery of his career, and it came two months  after a fifth back surgery.