Athletes are sending thoughts and prayers to the golfer. 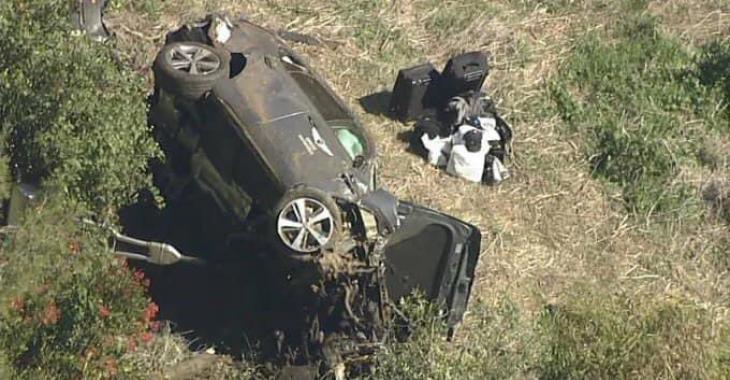 The news came as a bomb on Tuesday when the Los Angeles County Sheriff’s Department announced that Tiger Woods was injured in a serious car accident in California Tuesday.

The 45-year-old golfer was rushed at the hospital for surgery after sustained several serious injuries to his legs.

More details finally emerged as the Los Angeles Times reveals that Woods was traveling north on Hawthorne Boulevard at Blackhorse Road when he crashed his Genesis GV80 SUV just after 7 a.m.

While we knew from early statements that Woods was extricated from the wreck with the jaws of life, sources say he had to be removed through the car’s windshield.

Aerial images from the scene of the crash showed Woods’ vehicle lying about 30 yards off the road on its side.

This is what the Times reports:

“Law enforcement sources who requested anonymity because they were not authorized to speak publicly on the matter told The Times that Woods was traveling at a high rate of speed and lost control of the vehicle before crossing the center divider. Woods’ SUV rolled multiple times before coming to a halt. Officials have not revealed the cause of the crash.

The crash occurred on a curvy, steep stretch of Hawthorne Boulevard, a major road that cuts through the Palos Verdes Peninsula where signs warn trucks to use lower gears when traveling downhill. The road was closed Tuesday morning as deputies investigated.”

Woods “suffered multiple leg injuries. He is currently in surgery and we thank you for your privacy and support,” his manager, Mark Steinberg, said. Other sources indicates that Woods has fractured both legs:

It has been confirmed that he is suffering from non-life threatening injuries.

Athletes have been sending out thoughts and prayers to Woods on social media. We joined them in wishing him well.

Zdeno Chara goes after Brad Marchand after scrum!
Subscibe to
Our NEWSLETTER
Receive the best articles of the web directly in your email