Could Zdeno Chara take his talents to the Western Conference 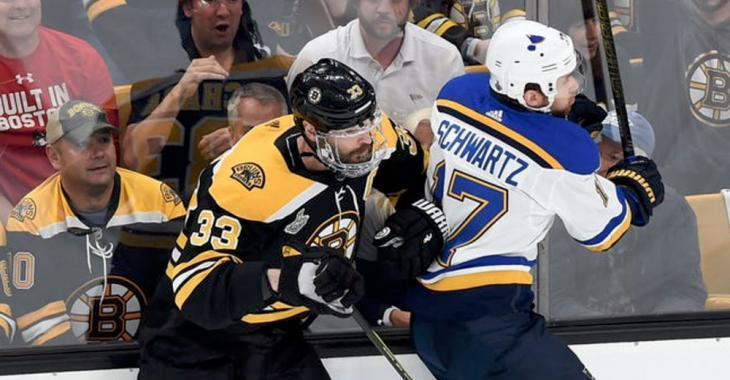 The towering figure on the ice known as Zdeno Chara continues to be an effective National Hockey League blue liner, despite being four years north of the four decade mark in his life.

He spent last season as a member of the Washington Capitals, having made the decision to depart the Boston Bruins after serving as their captain since the 2006-07 campaign and leading them to a thrilling victory in the contentious 2011 Stanley Cup Finals against the Vancouver Canucks. He also appeared with the Bruins in two other championship series against the Chicago Blackhawks in 2013 and the St. Louis Blues in 2019, which unfortunately didn't result in the same happy ending as 2011.

And speaking of the 2019 Stanley Cup Finals, could Chara soon find himself playing in the shadow of the Gateway Arch in St. Louis? According to one NHL source, the St. Louis Blues are reportedly interested in the man known as "Big Z".

“For the second straight summer, they’ve expressed interest in Zdeno Chara, according to a league source,” Blues reporter Jeremy Rutherford wrote for The Athletic. “Chara could provide a veteran to partner with Parayko, not to mention that the 6-foot-9, 250-pound defenseman could give the Blues the presence in front of their own net they’ve been desperately lacking.”

While playing with the Capitals last season, Chara averaged 18:19 of ice time per game in the regular season, scoring two goals and along with eight assists for ten points to go with a plus-5 rating. He also skated in 55 of the 56 regular season games during the shortened campaign. During the season, his family remained in Boston.

“I think it’s not always a decision I can make myself,” Chara said after his Capitals were knocked out of the playoffs by his former Bruins teammates this past spring. “Sometimes there are things in life you have to realize, and I have to have a conversation with my wife and children and see where we want to be in the next few days or weeks. After those conversations, I’m going to probably let the emotions settle in and see where I’m at.”

Yandle reportedly blocks three way trade between Bruins, Islanders and Panthers
Subscibe to
Our NEWSLETTER
Receive the best articles of the web directly in your email