Buddies, but only off the ice… 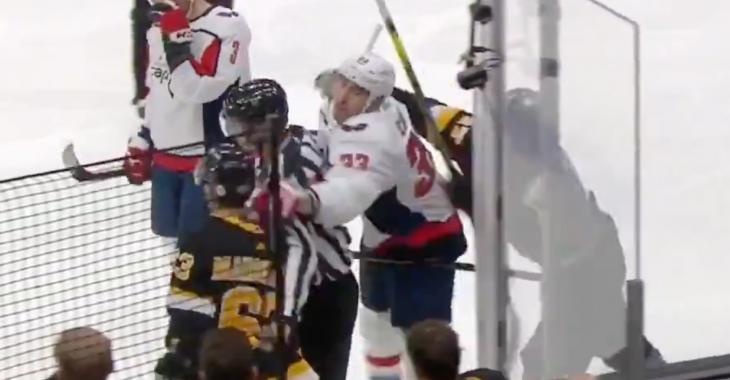 It was doomed to happen.

Tempers flared during Friday night’s game between the Boston Bruins and Washington Capitals, and we all know how forward Brad Marchand can get under anyone’s skin.

He managed to push his old captain’s button in the third period of the contest as the Bruins led 5-0. It had been an ugly game from the start especially since Caps winger Tom Wilson knocked defenseman Brandon Carlo out of the contest and two fights took place when both Jarred Tinordi and Trent Frederic dropped the gloves with the assailant. Wilson was not penalized for his questionable hit to the head of Carlo. The Bruins' defenseman missed the remainder of the game.

Then a scrum ensued in the third period, in which Marchand was pushing and shoving and running his mouth.

Chara was in the mix of it and went after Marchand when his former teammate took another shot at his new Caps' buddy Nick Jensen : the giant defenseman had enough.

He attempted to grab Marchand and hit him, but the Bruins’ forward was too busy yelling at Jensen. Bruins’ new captain Patrice Bergeron skated over, maybe to calm things down, but you could tell by Chara’s eyes he was not kidding.

NESN commentators wondered if the boys were still friends, and we all know that only counts off the ice. Check it out:

The Bruins might have lost Carlo (and their tempers), but they got away with a convincing 5-1 win over the Capitals.

NHL Player Safety hints at a MAJOR suspension for Tom Wilson.
Subscibe to
Our NEWSLETTER
Receive the best articles of the web directly in your email