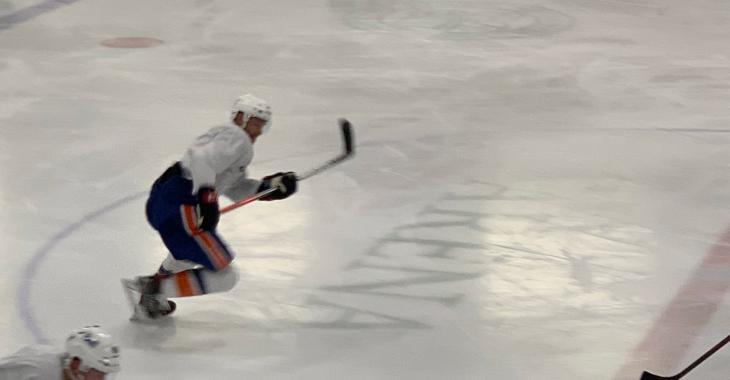 Most fans expected to see Zach Parise’s name could up last week when the New York Islanders announced four deals all at once, signing  Anthony Beauvillier, Casey Cizikas, Kyle Palmieri, and Ilya Sorokin to multi-year deals. However, one name that was not listed among them included Parise.

But then, The Athletic’s Michael Russo revealed how Parise confirmed that he is indeed joining the Islanders, though the contract has yet to be registered officially with the NHL.

On Tuesday, Parise was caught on the ice in his new uniform, practicing with pending new teammates despite no having an official contract in hand.

You have to admit the veteran looks good in his new colours.

Parise has a long history with Lamoriello, who was once the head honcho with the Devils. Lamoriello drafted Parise with the 17th overall selection in the 2003 NHL Draft out of the University of North Dakota, and it wasn’t long before he developed into one of the premier American-born players in the League.

However, the two sides parted with one another in the summer of 2012, as the former Devils captain who had just led his team to within two wins of the Stanley Cup decided to sign a massive 13-year contract with the Minnesota Wild along with defenseman and good buddy Ryan Suter; both players were bought out of the remainder of their contracts in the Twin Cities by Wild GM Bill Guerin earlier this offseason.

While Suter remained a steady blue liner, Parise saw his production and ice time fall in recent years, culminating in just seven goals and 11 assists for the Wild last season while averaging less than 14 minutes a game, the lowest since his rookie campaign of 2005-06.

His new deal with the Islanders is expected to be filed with the NHL shortly after the team moves defenseman Johnny Boychuk to Long Term Injured Reserve in order to gain full relief of his $6MM cap hit. Of course, the salary and term won’t be anywhere near the same stratosphere as the $98 million he agreed to with the Wild nearly a decade ago.

However, you can bet that Parise will be motivated to show that he can still be a productive player in the NHL. He’s also only seven tallies away from reaching 400 career goals.

Rumblings of a huge goaltending change in Las Vegas.
Subscibe to
Our NEWSLETTER
Receive the best articles of the web directly in your email