The young Sharks goaltender's mask is a living tribute to a past Sharks net minder. 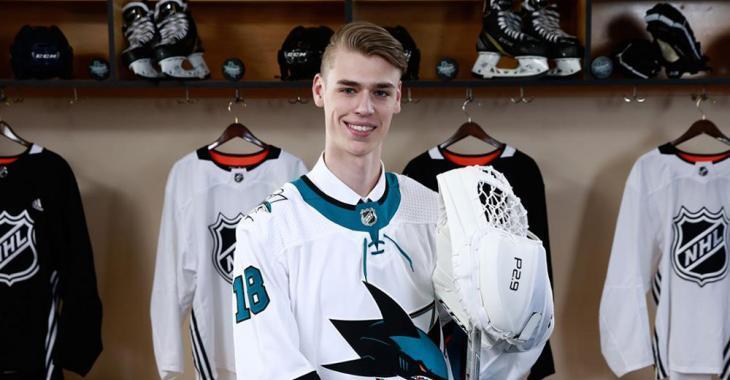 One of the most iconic goaltending mask designs in the history of the San Jose Sharks belonged to none other than Brian Hayward, who featured his famous sharks mouth painted on his lid:

And now, a member of the the newest generation of Sharks goaltenders is paying tribute to that iconic artwork.

Sharks prospect goaltender Zach Emond, who was selected by the Sharks in the 6th round of the 2018 Draft (176th overall), decided to incorporate a modern re-telling of Hayward's design onto his own mask.

"So here's my new Sharks mask - I found it cool to do a shark head, because in the past, I've always loved Curtis Joseph's masks," Emond explained. "I was playing for a team called the Huskies, so I had the Huskeis hard on my mask. Coming up here with the Sharks, I thought having a shark head would be nice. And then as a tribute also to Hayword's mask in the past. I wanted a modern look of it, so here's how it turned out. A big thank you to my artist."

After poaching Hakstol from the Leafs, the Kraken raid the Bruins for their next coaching hire

Team USA announces final cuts to WJC roster.
Subscibe to
Our NEWSLETTER
Receive the best articles of the web directly in your email