Can’t wait to see what this leads to on Saturday… 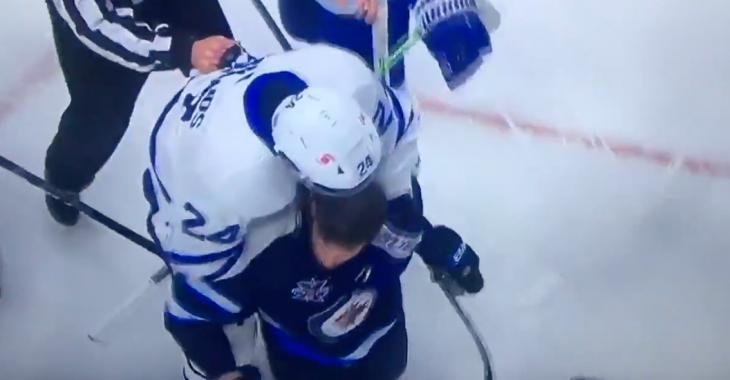 While they feel like they’re back on track, the Maple Leafs do not appreciate what the Jets have said about their performance. More specifically, veteran forward Wayne Simmonds was quite vocal on hearing that the Jets are unhappy with some of the hits last night. This is what he answered them:

“Every time we’ve played them, they’ve tried to run us out of the building to start games. We come back & we’re physical and now we’re a dirty team? I don’t buy that. We’re defending ourselves.”

A video of Jets' forward Pierre-Luc Dubois has gone viral on Friday as we can see the poor guy getting away from Simmonds on his knees to escape the Leafs' veteran after he goes after him.

The Jets and Maple Leafs will face off again Saturday at Bell MTS Place, and we bet Simmonds’ comments will get Winnipeg going.

On Friday, Maple Leafs forward Joe Thornton was fined $3,017.24, the maximum allowable under the collective bargaining agreement, for interference on Jets’ forward Mathieu Perreault. His questionable hit kinda make it clear the Jets had a point in their comments, however, fans won’t want to see the Leafs take it easy in this great battle in the All-Canadian North division.