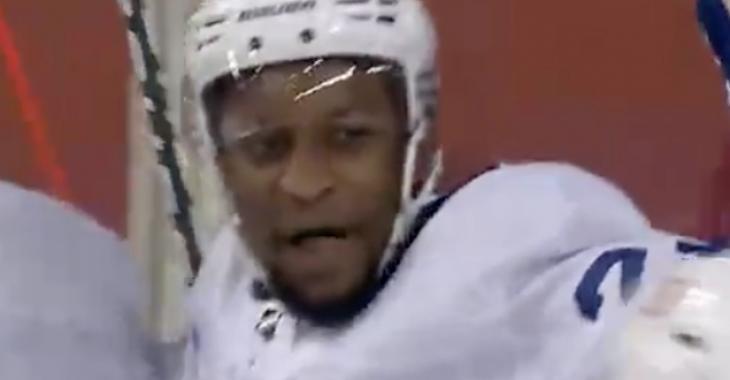 When the Toronto Maple Leafs were set to face off against the Calgary Flames on Tuesday night, everyone expected Wayne Simmonds to drop the gloves with Matthew Tkachuk.

That would be the best payback, right, after Tkachuk has been accused of intentionally falling on the Leafs’ backup goalie Jack Campbell, who will be out “weeks” with a leg injury suffered during the club’s 3-2 win over the Calgary Flames on Sunday.

While Campbell appeared to tweak something in his leg during the final minutes of the game, he remained in net to record his second victory of the season. A few plays after the injury occurred, Tkachuk fell on Campbell’s leg while attempting to score the tying goal.

The Flames’ forward, who was already hearing it from Leafs’ fans, called it “classic” to accuse him of deliberately trying to injure the Leafs’ goalie after the game.

That’s why fans expected that Simmonds would make him pay when the two teams met again on Tuesday night. However, the gritty forward found a better way to stick it to the Flames and Tkachuk as he scored the first goal of the game, putting the Leafs in the lead minutes into the contest.

He double tapped it and celebrated with a lot of passion. Check it out:

Isn’t that the best way to make him pay? We shall see if a fight comes later on during the game. We know how Tkachuk can get under anyone's skin...

Report: Flyers announce Sean Couturier has suffered a “ Costochondral separation.”
Subscibe to
Our NEWSLETTER
Receive the best articles of the web directly in your email