The team could be forced to change it over cultural appropriation concerns. 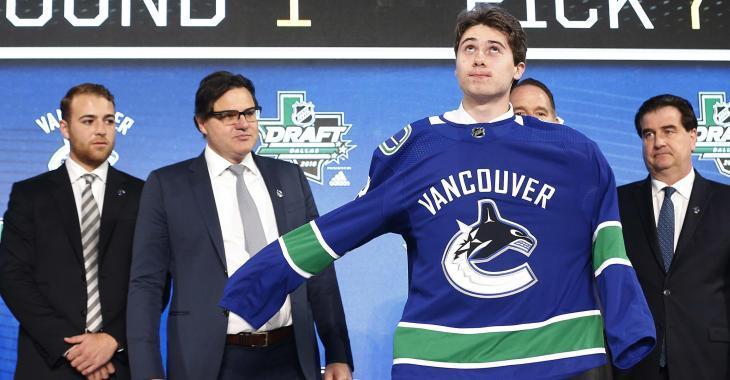 We’ve heard the news on the movement encouraging teams like the Washington Redskins in the NFL or Cleveland Indians in the MLB to change their names and logos. On Sunday night Major League Baseball and the Cleveland Indians confirmed that the name will in fact be dropped, potentially feeling the need to cave in to public pressure.

We now wonder if the same thing could happen to the Vancouver Canucks. The team is reportedly now feeling pressured to change after an Indigenous Studies expert claimed the main logo featured on the team’s uniforms is cultural appropriation.

On social media, Sean Carleton, who is a University of Manitoba history professor, revealed his concerns in a lengthy post, explaining why he feels the team’s orca logo should be replaced. He says the whale, which was created nearly three decades ago and has elements of artwork designed by Haida in it, is hurtful to indigenous people.

He goes on to say that he believes the Canucks took the design and now are making money hand off of it while diminishing indigenous people’s art.

“How can you continue to develop meaningful relations with Coast Salish nations when you continue to profit from branding that is appropriating their art style,” Carleton wrote on Twitter on Monday.
“People will say, but Sean the imagery is a ‘a sign of respect.’ How respectful is continuing to make piles of money from a business you operate on stolen land all the while branding that business with stolen imagery. That’s the logic of colonial capitalism for you.”

He demands that the Canucks do a better job of working with indigenous people and allowing them to be part of the team’s design processes going forward.

This comes days after goalie Braden Holtby was heavily criticized for his new mask created by artist Dave Gunnarsson. The mask was meant to pay tribute to Northwestern Canadian Indigenous myths, resulting in “Thunderbird” being featured prominently on Holtby’s mask. Some people were offended by the design.

“When we see the mask, although looking brilliant, one of the first questions you ask is ‘who made it?’”

When asked about a possible logo change due to the cultural appropriation concerns, Canucks owner Francesco Aquilini had said back in 2019 the team was not considering a logo change.

“It’s indigenous to the region. We’re going to keep it.”

Over the past few seasons, the Canucks have worn alternate uniforms — throwback-inspired threads — that do not have the orca design on them. The change could be easily done.

Auston Matthews set to make his season debut.
Subscibe to
Our NEWSLETTER
Receive the best articles of the web directly in your email