NHL News : Unsigned Tkachuk, Pettersson and Quinn all together in Michigan during contract stalemates 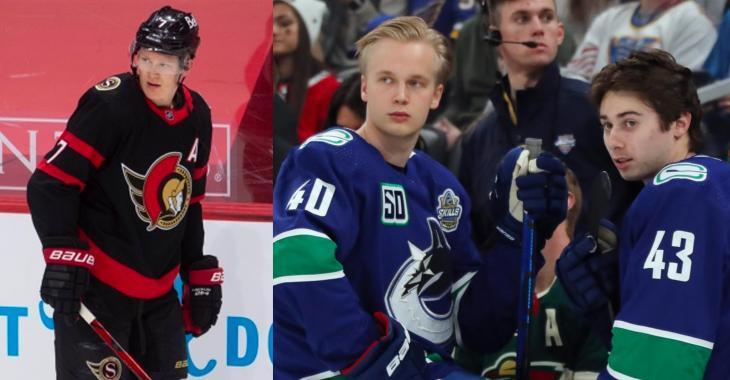 As you know, forward Elias Pettersson and defenseman Quinn Hughes have yet to sign extensions with the Vancouver Canucks. Both restricted free agents are coming off their entry-level contracts and all eyes are now on them as they have yet to re-sign with their team.

To date there have been reports that both sides are grinding away at long-term extensions for both players, but in the past week there’s been some uncertainty that a deal will get done in time for training camp. On Tuesday, there were reports that Pettersson has left Vancouver entirely and has flown to Michigan to train with Hughes in his hometown.

And another unsigned RFA has joined them. According to Pierre LeBrun, Brady Tkachuk is training with Pettersson and Quinn in Michigan while they await their contract situations to get resolved.

On lats night’s edition of Insider Trading on TSN, Darren Dreger reported this:

“Both Quinn Hughes and Elias Pettersson are hopeful that they will find some common ground with the Vancouver Canucks’ management. But there’s a fair bit of work and positioning changes that have to be observed there. Meanwhile, if you look at Brady Tkachuk, again, there’s the top three restricted free agents. There is work being done between the Ottawa Senators’ management group and of course those who represent Brady Tkachuk from Newport Sports. Now, they continue to say that the negotiations are positive. It feels like it’s broken down now to structure and protection, those are likely the main hurdles. But you have to wonder if a shorter term becomes an option if negotiations drag closer to opening night.”

The clock is ticking and the three RFAs are skating together and comparing numbers.

The official Stanley Cup final schedule revealed!
Subscibe to
Our NEWSLETTER
Receive the best articles of the web directly in your email