NHL News : Tuukka Rask makes statement on returning to Bruins despite being sidelined long-term with injury

Are the Bruins going to take the risk? 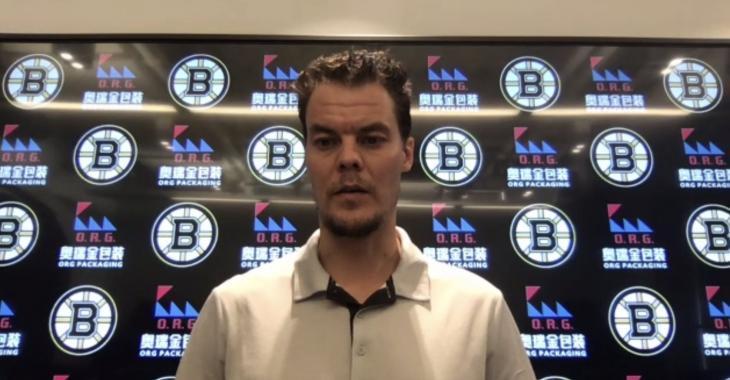 Fans had a feeling goalie Tuukka Rask was not at his best in the second-round series against the New York Islanders. There were even doubt during the six-game series that Rask could miss a game, after he was in net for two periods and allowed four goals on 16 shots in Game 5. When the Bruins jumped back on the ice for the third period, it was Jeremy Swayman who was in the cage. The Bruins lost 5-4 before they went on to lose Game 6 and get eliminated from the postseason.

It was confirmed on Friday that Rask suffered a torn labrum in his hip and will undergo surgery within the month. He is expected to be able to return to action in January or February.

He however maintains that he doesn’t want to play fro anyone else than the Bruins and is hoping he can return.

As Rask continued to talk about the injury he sustained against the Carolina Hurricanes in the Toronto bubble last postseason, stating that it seized up again this year and that he could barely walk at moments, insider Fluto Shinzawa explained that the Bruins now have no choice but to go out there and acquire a veteran goalie to help out Jeremy Swayman and Dan Vladar in 2021-22.

Jaroslav Halak’s contract is also over and we don’t know if the Bruins are set on bringing the 36-year-old netminder back.

If you are the Bruins, do you wait for Rask and give him a deal to have him back in the second half of the season? Or is it time to do, like most fans suggest, and let him go to focus on another goalie for Boston.

Rask won’t know what you think: he was asked about handling criticism and answered:

"It doesn't affect my game. ... It's not like I go to the grocery story and people are throwing eggs at me. That would suck."

“There’s a reason I don’t read social media or the news… It doesn’t really affect me because I don’t hear that noise.”

And so, make noise for us.

Here is the full press conference:

Matthew Barnaby under fire for comments on yesterday's events at the U.S. Capitol

Ryan Miller overcome with emotion after his final game in the NHL.

Evander Kane mocks Ryan Reaves after a chaotic incident in Game 1.
Subscibe to
Our NEWSLETTER
Receive the best articles of the web directly in your email