Tortorella shares his thoughts on the season. 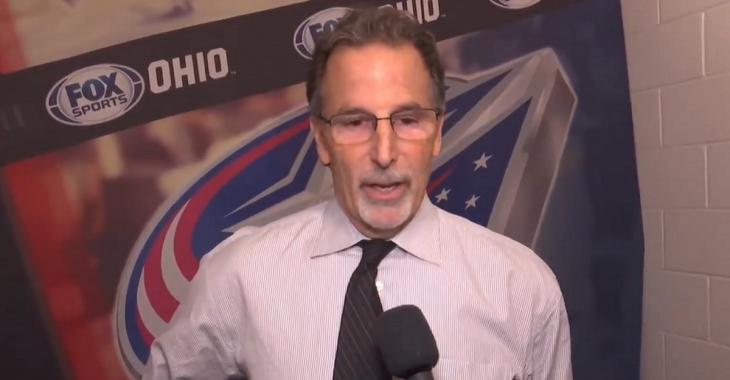 The Columbus Blue Jackets officially parted ways with head coach John Tortorella on Sunday, announcing that the team and coach had come to a mutual understanding that it was best for both sides to move on but rumors suggest that the decision may have been made prior to Sunday's announcement. There were reports on Saturday night that Tortorella had already begun to inform some of his players about his decision to leave the team at the end of the season, and given the way things played out this season in Columbus it really should come as no surprise.

What many seemed to have missed however was an interview Tortorella conducted just prior to his final game on Saturday night, one in which he went into great detail about what went wrong for the Blue Jackets over the course of the regular season. Perhaps because he knew he was on his way out, or perhaps just because he is John Tortorella, the veteran head coach was extremely candid during the interview pointing to problems within the team as well as at his own failures as a head coach this season.

On how not having a training camp impacted his coaching style.

"I certainly don't want to use that as an excuse as far as what has happened to us this year, but it's an important time," said Tortorella on the Blue Jackets Radio Network. "You get them to a crescendo where they say, you're not gonna beat us, we're not gonna give in to you," said Tortorella in regards to pushing players hard in camp in order to get them to band together against their coach.

"That creates that comradery that I think is so very important, and that's the mental part of our camp that I really enjoy seeing players in the middle of it and see how they handle it and see if they can get to the other side of it. And we missed that."

How COVID affected the team.

"The other stuff around just going out to dinner, having a beer or two together, all that stuff brings the comradery too. After a tough game on the road, going out, and you can't do that either. Crazy year, certainly not using that as an excuse for how bad we played this year, how inconsistent we were, but that's a big part of who we are and that's a big part of how we built our standard here."

On the Pierre Luc Dubois situation.

"For some reason I just did not do a good enough job in corralling the team, after Luc played a few games with us that was not up to the standard. It came to me sitting Luc in a game that turned into a big thing in our team, we didn't handle it well enough. That's on my watch, that's a big part of what I need to take care of and for some reason I did not get the steps in the right order to keep us together."

On being glad that this season is behind him.

"When you're not winning hockey games it sucks, it just sucks. We have sucked all year long and it has been miserable. Quite honestly this is our last game and thank god, I'm glad it's over."