That’s why many believe there is more to Dubois’ trade demands! 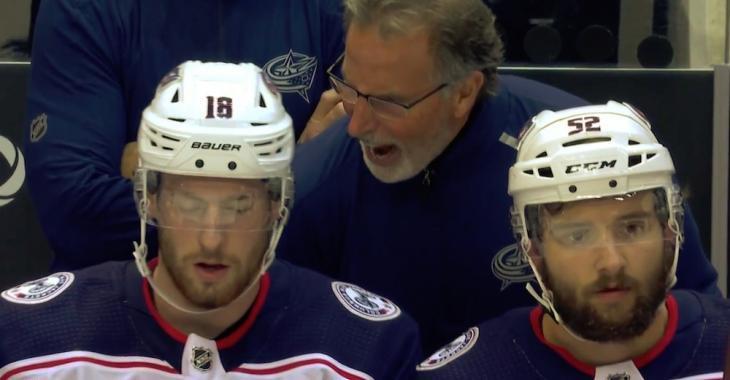 Columbus Blue Jackets head coach John Tortorella benched his forward Pierre-Luc Dubois for two full periods in his team’s 3-2 overtime loss to the Tampa Bay Lightning, after he seemed to give up on a puck battle in the offensive zone in the first period. He played just 3:55 in the entire game. That’s what’s trending in the hockey world today.

A lot has been written on the matter and now Aaron Portzline, team insider for The Athletic, has put together a great article on how Dubois vows to be better, whenever his next game is, since there are rumours he could be benched for Saturday’s contest against the Bolts. What’s interesting however is that Tortorella refuses to compare Dubois’ situation to the one the Blue Jackets dealt with two seasons ago, when it was well known that both Artemi Panarin and Sergei Bobrovsky wanted out of Columbus. They ended up leaving during free agency, the star sniper went to the New York Rangers, the goalie, to the Florida Panthers.

“They’re different situations,” Tortorella said. “Bread and Bob, their contracts were up. They have a right to go to free agency, two players who … played their asses off that year. Two great pros. That elephant in the room was cleaned up very quickly. They were pros and they played.

“This situation … it’s a younger player, not free agency. It’s wanting out. It falls on the player and how he handles the situation. We’ve been honest. We’ve had the meeting. But then it comes down to the play.”

Dubois is believed to have demanded a trade in order to get the chance to play in a bigger market, something that sounds selfish to Tortorella.

“I don’t think it’s a really big deal, the spotlight, because it doesn’t change how I go about that part of it,” Tortorella said. “(Dubois) is another player on a 23-man roster that I have to watch.

On Friday night, TSN's Darren Dreger reported that the Blue Jackets were closing in on a trade for Dubois. Dreger explained that it is a complicated process, however, teams out of the running have been informed. It could be resolved as early as tomorrow.

Ever since Dubois requested a trade, the Montreal Canadiens are believed to be his preferred destination. It is believed that more than 12 teams have checked in on Dubois, many of whom have expressed significant interest in acquiring him. The Anaheim Ducks, Winnipeg Jets, Montreal Canadiens, Calgary Flames, New York Rangers, Minnesota Wild, Ottawa Senators, Buffalo Sabres, Philadelphia Flyers, Detroit Red Wings, Washington Capitals and Arizona Coyotes are among those teams interested.

While Dreger admits it is hard to say who remains a contender for Dubois' services, it is believed that the Jets are still amongst them.

However, the Wild has reportedly been told they are out of the Dubois trade sweepstakes.

We should know soon.

Habs hint at their lineup for the start of the regular season.
Subscibe to
Our NEWSLETTER
Receive the best articles of the web directly in your email