The gloves are off! No more love letters for Laine in Columbus. 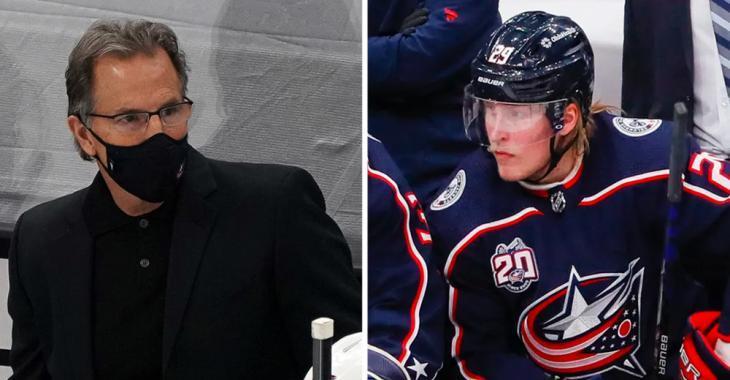 Stop me if you've heard this one before but Columbus Blue Jackets head coach John Tortorella is under fire after benching one of his star players.

No... I'm not talking about Pierre-Luc Dubois... I'm talking of course about the man he was traded for: Patrik Laine.

Laine, of course, was acquired in a blockbuster trade that involved Dubois after it was alleged that a rift between Dubois and Tortorella fractured his relationship with the team. Now, it appears as though Laine might be Torts' new whipping boy as the Finnish sniper sat for most of the second period and the entirety of the third period in last night's victory over the Carolina Hurricanes.

After the game, Tortorella knew that questions would come from the media and he cut things off abruptly, calling the matter one that will "stay in house."

When he says that there's a standard that his team is trying to reach and there's a culture around the type of way that they play, I believe that to be 100% true. The Blue Jackets' identity is that of a working man's team. I mean, this is a team that lost its two biggest superstars two years ago and was actually a better team as a result. The Blue Jackets go to work every game and if Laine isn't going to fit in with that strategy, he'll likely sit.

Now on the other hand, for better or worse Patrik Laine is NEVER going to be a defensive beast. He's NEVER going to be an in your face type player and truthfully he's probably never going to play the way that Torts would like him to. Is this another case of Torts forcing a square peg into a round hole? And if so, he knows that Laine is a pending free agent right? Does he care?

Again, for better or worse Tortorella sure doesn't handle these types of situations with much nuance or care for outcome. He's a "let's hash this out right here, right now" kind of guy, but I feel like it would serve him better if he realized that not everyone else deals with conflict the same way. Frankly, I see trouble brewing for Laine in Columbus and, even more frankly, I saw it coming from a mile away. Stay tuned.

Report: Another disappointing update on the Evander Kane situation courtesy of Sharks insider Kevin Kurz
Subscibe to
Our NEWSLETTER
Receive the best articles of the web directly in your email