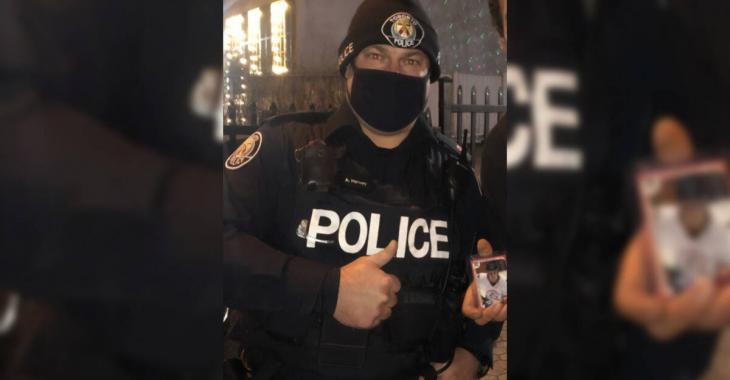 This gesture was supposed to be a nice one, however, it has gone viral for all of the wrong reasons. Last week, Toronto police’s 51 Division shared a photo to its Twitter account, depicting a police officer and a homeless man. The reason why it went viral at the point isn’t because the intention of forging and strengthening relationships between law enforcement and vulnerable communities, but because it started with the homeless man revealing to the officers that he used to be a professional hockey player.

The officers decided to purchased his hockey card and offered it to him. This is how the post, which has now been deleted, read:

“Our Yonge St Neighbourhood Community Officers found a homeless man who was a former hockey player,” tweeted the division, which services Moss Park, the Church-Yonge Corridor, and Regent Park, among other neighbourhoods.

“They located his hockey card online, purchased it, put it in a protective case & gave it to him today. (Photo cropped for privacy)  #EveryoneIsSomeone #WeAreInThisTogether"

However, while the photo was indeed cropped to keep the identity of the player anonymous, some internet masters managed to look up with hockey card, which can still be seen on the photo.

This has caused several fans to get quite made at law enforcement, adding statement such as : “Food and shelter maybe would have been more helpful.” Some are also worried this might have been brutal for the hockey player, reminding him of his former glory days — but not in a good way.

While we have to admit cops were trying to be nice to the homeless man, the fact that he was exposed might have defeated the purpose.

Many believe the player is Joe Murphy, a former first overall pick and NHL player who wore the colours of the Detroit Red Wings, Edmonton Oilers, Chicago Blackhawks, St. Louis Blues, San Jose Sharks, Boston Bruins and Washington Capitals. He has been homeless and was living on the streets of Kenora, Ont. back in 2018. He struggled with injuries, most notably concussions and then with drugs and alcohol.

Fans get some update here and there on Murphy, but little has been said about him in the past year. We sure hope that he is doing well, and if ever it is him in the picture, that he was happy with this encounter.

People remain divided about their thoughts on police and also the city’s treatment of those experiencing homelessness and we were able to see it quite vividly after this incident.

At least one team “very interested” in Tony DeAngelo.
Subscibe to
Our NEWSLETTER
Receive the best articles of the web directly in your email